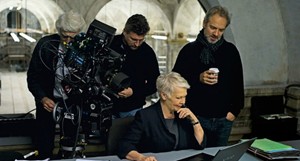 There is no shortage of hype surrounding the 4K initiative, most of it coming from the high-end camera and television manufacturers.  During our research on the 4K topic we’ve found very few compelling reasons to support this technological advancement, and quite a few points that prove the world isn’t quite ready for the current implementation of 4K.  We’ll outline some of the pros and cons of 4K technology and you can decide for yourself if 4K is the right tool for your job.

Camera and television manufacturers claim that 4K looks better, that more pixels means a better image.   In fact there are very few instances where this is the case.  In your living room, this is almost never the case for two reasons. First, the current HDMI 1.4 standard is forced to limit the 4K stream to 8-bit color (16.7 million colors) due to bandwidth limitations of the HDMI interface. An increase in color range to 10-bit (over 1 billion colors) is something the human eye can perceive.  HDMI 2.0 will fix this limitation, but is just now starting to be rolled out to consumers.  Second, these 4K monitors look wonderful in the showroom when you are standing a few feet away, but when your couch is 10 or 12 feet from your snazzy new 4K Ultra HD TV, you have effectively surpassed the ability of your retina to discern pixel separation because of the distance.  In this case 1920x1080 will look nearly identical to 4K. This is compelling justification to not buy a 4K TV just yet, but what about shooting in 4K? 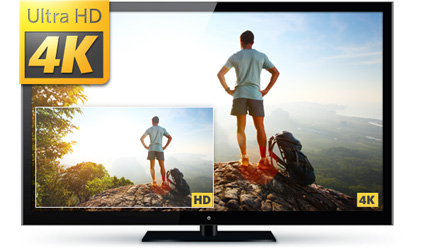 
Eleven-time Academy Award nominated Director of Photography Roger Deakins, ASC, BSC choose the ARRI Alexa and its ARRIRAW 2.6K workflow for the largest grossing James Bond film ever, “Skyfall”.  The mastered product was upscaled to 4K for theatric and IMAX release and it looked fantastic.  This choice is further justification that better pixels are always preferred over more pixels.  Deciding to utilize 4K on the premise that ”more is more” is a flawed argument. 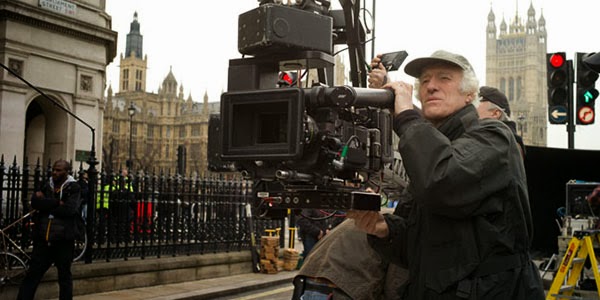 Roger Deakins ASC, BSC on set of Skyfall with an ARRI Alexa Studio

We’ve found both positive and negative reasons for using 4K as it pertains to post-production.  To obvious downside is the storage requirements needed for 4K material.  4K media is nearly four-times the amount of digital information over 1080P HD.  A 4K 4:4:4 RAW uncompressed stream at 23.98fps is roughly 3.82Gbps (447MB per second).  At that data rate, one hour of 4K footage would take up more than 1.7TB of storage, whereas an hour of RAW 1080P video of the same colorspace and framerate would be about 540GB.  That is a lot of information to move around, both on location, and in the edit suite.  So be prepared for this by having both ample drive space and uninterrupted power for your Media Manager/DIT on location because they will be copying media all day long.

On the upside, if your final project is a 1920x1080 HD deliverable as most projects are these days, shooting in 4K gives you the ability push in, stabilize, pan and scan, or perform simulated camera moves in post without any loss of quality.  You can shooting everything a bit wider and make your final framing decisions during editing.  However, acclaimed Cinematographer Phillip Bloom warns “Don’t forget the craft!”.  Tools do not make your content better. Proper framing, composition, content, and story is what makes a better product.

This is where 4K doesn’t make any sense at all.  There presently there are no mainstream delivery methods in place to get 4K content to your 4K TV.  There is lots of stuff in the works at the present time for delivery methods, but no across the board standard that works everywhere.

• Optical Media – Presently Blu-Ray does not offer a 4K disc standard.  However, one is in the works with an estimated release date of 3rd quarter 2014.  It will involve buying a new player that will support the brand new 3-layer 100GB discs.  However it is rumored that Sony’s Playstation 4 will be firmware upgradeable to handle the 4K UHD Blu-Ray disc.  Obviously there will be a limited selection of content during the initial rollout of the product.

• Cable and Satellite – To this day there still doesn’t seem to be a great across the board solution to HD broadcasting.  Cable providers in particular still seem to be stuck in the dark ages with all their standard def offerings in the lower, easy to navigate spectrum of channels and their HD offerings hidden high up in in the channel list near the music and pay-per-view channels.  But Comcast has taken an early start in implementing 4K in the form an Xfinity 4K app for Samsung UHD TVs  and new X1 set-top boxes using the HEVC H.265 codec.  Comcast states this will roll out at the end of the year.  However, given the historical snails pace of cable providers to adopt emerging technologies, we would be surprised if that claim was adhered to.  DirecTV is hedging its bets by stating ”If 4K takes off, we’re in a good position as far as capacity”.  They are waiting to see where the chips land with regards to broadcast and compression standards.  While DirecTV appears to be the frontrunner in 4K satellite broadcasting, don’t expect to see 4K material from them until 2015 or even possibly 2016.

• Streaming Media – As reported in a previous Moving Picture industry trend article, streaming media giant Netflix already consumes 1/3 of the entire internet’s available bandwidth during peak hours.  This is a mind numbing extrapolation of statistics that is better left in the abstract.  Their current SuperHD steam is presently 6Mbs, and with the present H.265 compression for 4K media to be roughly 15Mbs, it stands to reason that significant bandwidth upgrades from the provider all the way to the consumer will need to occur before any major 4K streaming media can be a widespread success.  Nevertheless, Netflix has started streaming it’s original series “House of Cards” and a few nature documentaries in 4K for those that own 2014 4K TVs that have the HEVC decoder.  YouTube has added “2160p 4K” to its list of available video settings.  This actually isn’t a new thing, you could upload 4K content a couple of years ago and view it by selecting the “Original” selection from the video settings menu.  However, as most have found, it’s hard enough to view a 1080P YouTube video without experiencing buffering issues.  A 4K stream has three times the bandwidth requirements as 1080P, so YouTube would not be the medium of choice for 4K at the present time. 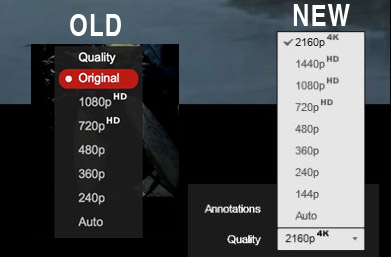 Well, the reality is 90% of the material we shoot is really only relevant in the here and now.  Footage will usually date itself within 3-5 years due to changes in wardrobe and style, changes in personnel, or other elements of a client’s business that changes over time. Shooting in 4K isn’t going to change any of that.  Additionally, if you utilized any of the above-mentioned reframing or pan and scan post production tricks, your final mastered product will only look good in HD, any attempt to re-master the video for 4K is easier said than done.

So, where does that leave us?

Right now, 4K is the toddler of the media community.  It can only get bigger and better as time marches on, as other emerging technologies have such as 3D.  Using the 3D example, the market learned that it wasn’t crazy for the 3D TVs, but the new digital 3D movies (especially in IMAX) are nothing short of breathtaking.  So our advice, hold off on big 4K purchases on the consumer side until the dust settles on the media delivery of 4K content.  As far as 4K capable camera systems are concerned, remember that 4K is just a tool.  It’s not going to make you a better shooter, improve the quality of your production, make your footage forever useable, or make you a Hollywood sensation.  Weigh the usage of that tool like any other you use on set such as sliders and jibs.

About David Wells
David Wells is a Director/ Cameraman, life-long technologist and the President of Moving Picture, an integrated production services and rental house.  Wells got his start in the film industry as an on-set PA on the hit TV series “Miami Vice”. Since then, Wells has produced and directed award-winning commercials, branded content and corporate industrials for Cover Girl, Kaplan University, Harley Davidson, CNN and others.