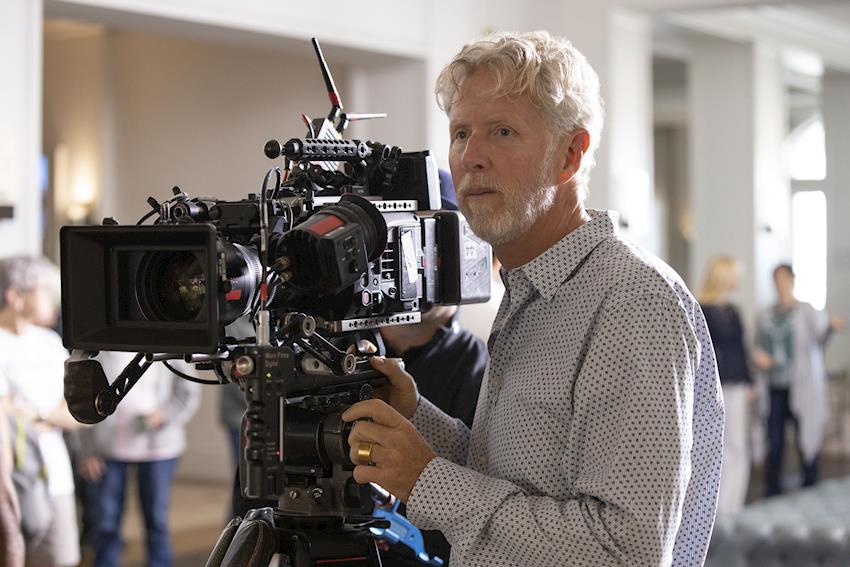 Created by Seinfeld co-creator Larry David as a fictionalized version of himself, Curb Your Enthusiasm premiered on HBO twenty years ago. Along with Mitchel Hurwitz’s Arrested Development, the series transformed the half hour comedy sitcom genre from multicam to single camera in its use of handheld documentary style cinematography. What do both shows, and the upcoming Netflix show, Brews Brothers, have in common? They are all currently shot by cinematographer Patrick Alexander Stewart with VariCam LT cinema cameras.

With a background that includes documentaries and indie filmmaking, Stewart has had the reputation of being one of the best handheld cameramen in the industry ever since he shot filmmaker Mike Figgis’ landmark DV film Time Code (2000). He became involved with Curb Your Enthusiasm on season nine through the recommendation of producer Jeff Schaffer, with whom he had worked on FX Network’s The League, shooting all seven seasons. For Curb Your Enthusiasm, which was previously shot with Sony FS7s, Stewart opted to go with VariCam LTs. “I’ve been a huge proponent of the VariCam LT since its release,” explains Stewart. “The camera’s sensitivity is beyond compare and it renders fantastic colors, especially with skin tones.”

For the handheld style of Curb Your Enthusiasm, the VariCam LT’s compact and lightweight body greatly helps Stewart and his operators. “When you add up all the bells and whistles that operators and assistants need on the camera,” says Stewart, “with takes that can go on for up to 15 or 20 minutes, it really helps the camera operators to not shoot with a 30-pound camera on their shoulder.”

Similar to his on-set workflow for Arrested Development, Stewart enlisted three VariCam LTs to capture scenes. Even though he’s not shooting scenes with six to seven cast members like on Arrested Development, Stewart likes to keep his days manageable and his cast more energetic since they’re shooting five days per episode. “The three-camera method for me is that my C-camera will be the master and it usually starts capturing somewhere in the middle of the scene visually,” explains Stewart. “Our A- and B-cameras are on wings, left and right, both sides. We’ll usually begin shooting from there and then we work our way in tighter, following the blocking. As we progress, C-camera will shift from the center to one side or the other in order to help out with more coverage.”

On set, Stewart is usually eyeing his monitors and communicates with his operators via a headset intercom system to suggest camera adjustments (e.g. wider or tighter shot, pan to the actor). Stewart’s camera operators, Patrik Thelander and Parker Tolifson, have been working with him for years. "In addition, for Season 10, we've also had John Purdy, who has shot almost every previous season of the show," says Stewart. "They’re the best. They know exactly how to approach the scene and what coverage is needed.”

Even though the series is shot in a documentary style, Stewart is not just using natural or practical lighting. He’ll decide from where and how the light for each particular interior would be emanating, and then work to adjust or accentuate it. “I avoid adding light from every angle because then it just becomes flat, and boring,” says Stewart. “Hopefully I'm able to preserve some shadow, or at least a little bit of gradient shadow, even though the actors in the scene are sometimes blocked to be able to turn almost 180 degrees from one side to another.”

The performances in Curb Your Enthusiasm are improvised. For instance, in a 35-minute episode, the script is less than 15 pages, consisting of description of the action and key lines of what the actors will cover or say in the scene. Along with figuring out how he will light a scene, Stewart will work with the director and producer on specific blocking for the scene during the original location scouting. “There are many variables that can occur in a show that is improvised,” says Stewart. “Because of the improvisational nature it’s possible to miss a line or action, that might only happen on one take. We always want to be ready. We're pretty precise as far as the skeleton of planning what's going to happen in the scene and we have really good people that know how to cover it.”

The production is shot in UHD (3840x2160) resolution at 23.98-fps. Stewart records 10-bit 422 AVC Intra files in V-Log and he uses a V709 viewing LUT for on-set monitoring. For low light shots, Stewart utilizes the VariCam LT’s Native 5000 ISO and depending on the situation, might set it at 5000 Base and dial down to 2500. “It really depends on how big the scene and how much action there is,” reveals Stewart. “For a set like Larry's kitchen, there are some large window sources on the opposite side of the room from the counter. I’ll try and motivate the light, as if it’s coming through those windows to light the scene and then augmenting places where it's a little too dark.”

Some of Stewart’s go-to lights are the Lightstar Luxapar 12 lights, which come in arrays of 24, 12, and 9. They are similar to the ARRI M60 HMI with more spread and punch. “They've got a nice short Chimera for diffusion,” explains Stewart, “and vertically in line you can also pan them in and out to accentuate focus or spreading out the beams a little bit. The color is excellent.” He also utilizes LiteTile Plus fixtures, which he prefers because when shooting in rooms with 8’6” ceilings, they can be easily mounted to provide a soft push from overhead. Both the Luxapars and the LiteTiles are dimmable to zero and have adjustable color temperatures.

Curb Your Enthusiasm was posted at Level 3 Post and was graded by colorist, Ken Van Deest. The grading is usually straight forward and Stewart does not heavily adjust the color scheme unless it’s a scene with multiple mixed sources. “I'll either balance skin tone closer to Tungsten or daylight, then decide if the rest of the picture looks best cooler or warmer,” explains Stewart. “Sometimes I'll decide to balance in the middle at around 4300K and then you know everything else is either slightly warmer, or slightly cooler in tone.

“Once we get done with color, I'm usually adding vignette to shots, and adding a bit of exposure to actors if it’s a contrasty background or they’re a little under,” continues Stewart. “With Curb, nothing drastic color wise is applied because it should feel like Larry’s World - a real place.”

Panasonic System Solutions Company of North America, a division of Panasonic Corporation of North America, delivers game-changing technology solutions that deliver customized experiences to drive better outcomes—for our customers and our customers’ customers. Panasonic designs and manufactures reliable, flexible and dependable products and solutions to help create, capture and deliver information of all types, especially where, when and how it is needed. The complete suite of Panasonic professional solutions for government and commercial enterprises of all sizes addresses unified business communications, mobile computing, security and surveillance, retail point-of-sale, office productivity, audio and visual systems (projectors, displays & digital signage) and professional video production. To learn more and Panasonic’s business products and solutions visit https://na.panasonic.com.

Newark, N.J.-based Panasonic Corporation of North America is a leading technology partner and integrator to businesses, government agencies and consumers across the region. The company is the principal North American subsidiary of Osaka, Japan-based Panasonic Corporation and leverages its strengths in immersive entertainment, sustainable energy, integrated supply chains and mobility solutions to enable its business-to-business customers. Panasonic was highlighted in Forbes Magazine’s Global 2000 ranking as one of the Top Ten Best Regarded Companies for 2017.  The ranking is based on outstanding scores for trustworthiness, honesty with the public and superior performance of products and solutions. Learn more about Panasonic’s ideas and innovations at www.na.panasonic.com/us.