Industry Heavy-Hitters Weigh in on 4K 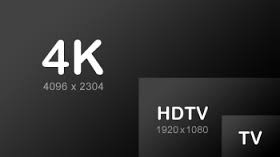 We asked major companies like Atomos, Avid, Freefly Systems and more what they really thought about 4K. Were they for or against it? Find out here:


Do you think 4K is over-rated?


Atomos
We genuinely feel that 4K is a game changer, far from being over-rated.
People will gravitate to 4K if they are exposed to high quality, low cost solutions. The only threat comes from people experiencing a poor version of 4K as a result of cheap, inferior sensors developed outside of Japan. 4K has to be amazing and affordable for the masses to adopt it. We believe that means supporting the big 4, Sony, Canon, Panasonic and Nikon because they have the best images and do 4K justice. GH4 and A7S are the go to cameras today.

Avid
The difference in resolution between HD and 4K may not rival the revolutionary improvement that HD was to SD for the viewing public, but with its higher frame rates, wider color gamuts, and increased dynamic range, 4K represents a substantial next step in the evolution of digital media, so we definitely expect it to be a trending topic at IBC, as it was at NAB. As high-resolution file-based cameras become affordable, one of the primary reasons to acquire in increasingly higher resolutions is to capture the performance in the highest possible quality, effectively “future proofing” the investment and extending the media’s shelf life.

By far the most significant benefit of acquiring high-resolution imagery is the increased flexibility and control achieved in postproduction. Having four times the pixels provides enormous flexibility in deciding which part of the image to display in an HD raster. An editor can pan across the image dynamically, adding additional motion to the shot or zoom in significantly without any loss in quality. Expanded color gamuts and dynamic ranges enable cinematographers to use techniques like HDR to capture light in new, dramatic ways, and gives colorists more latitude for contrast and color changes without losing detail or introducing noise.

Zeiss Lenses
Yes, I expect that the trending 4k topic is going to continue at this years´ IBC, just like the prominent presentation at NAB 14. The 3D trend of the last few years was replaced by 4k and there are several reasons why or why not this makes sense.
If we look at the current status. 4K production is becoming more and more relevant. 4K represents a huge increase compared to the 2K (1920 x 1080 high definition digital image) format. And also the TV industry is interested to sell 4k monitors. Having said that, 4k stays a very complex topic, as it is a challenge to handle the content, like distribution to the home theatre or post production in general.

4k basically means a physically higher number of pixels on the sensor compared with 2k. However, these are details of secondary importance that also ignore the transmission properties of the film emulsions when compared with DI. Compared to the existing, widely spread 2K standard, what counts is that 4K means a doubling of the transferable spatial frequency range. As a result, the system features a better contrast transfer function behind the lens. With every lens, this results in an improvement of the perceivable image quality. There is, of course a considerable benefit over 2K when the lens allows high contrast transfer above the spatial frequency range of 2K – this is the range between 40 and 80 line pairs per mm in the Super 35 format.

Generally, under the conditions provided and in accordance with the current state of the art, all current ZEISS cine lenses are suitable for shooting in 4K, and enable a high degree of detail to be achieved in the resolution. When using ZEISS cine lenses on 4K cameras, the optics are not a limiting factor as far as the desired image result is concerned.


Freefly Systems
A 4K standard is certainly where the industry is headed, we just aren’t there yet economically. It’ll certainly be a trending topic again at the show, with affordable 4K-ready cameras and more compact broadcast systems appearing on the show floor in even greater numbers.

Hive Lighting
I think 4K capture, distribution, and display are going through some serious growing pains, but to describe the technology as overrated would be shortsighted.  4K offers the possibility of improving the way we view content, I see following the same path as when HD was introduced.  I expect it to be a trending topic at IBC this year because 4K requires a lot of ancillary technology.  Many content creators will need to be prepared, for example, with the appropriate lighting, lenses, displays, etc for 4K capture.  It takes planning to make a 4K-compatible system, and IBC is a great place to discover the right production and post-production technologies for the next wave of 4K.


Cooke Optics
Yes, but the camera guys need to push new stuff regardless of need.  People forget that a good image that helps tell the story is the key not whether it's 2k or 4k or 6k...We have arrived at the point where the technology (instead of the story) is wagging the dog.

Litepanels
4K has its advantages. Streaming video has adopted this technology, and it's great for anyone who cares about picture quality. One major hurdle is the Disk format, but I wouldn't be surprised to see a solution there soon.