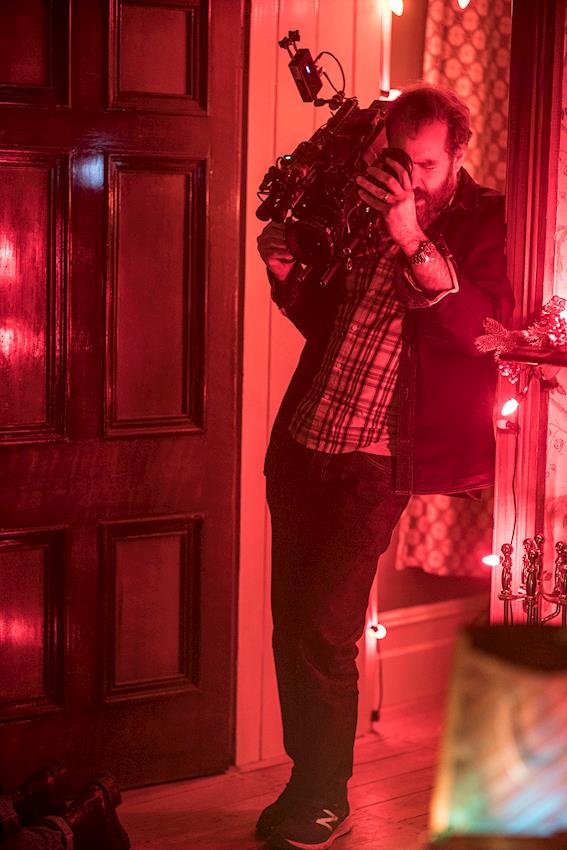 As Hawthorne College winds down for the Christmas holidays, a black-masked stalker begins killing sorority sisters one by one. Produced by Jason Blum (Halloween, Get Out) for Blumhouse Productions, Black Christmas is a re-imagining of the 1974 cult classic to a 21 st century audience. The horror film was directed and co-written by Sophia Takal (Always Shine). Although Takal was a fan of the original film, she wanted to bring attention to contemporary women’s rights issues, in particular the Me-Too movement. The film was shot by cinematographer Mark Schwartzbard (Forever, Master of None) with VariCam cinema cameras rented out of Panavision New Zealand. “The original Black Christmas was made in 1974 and it was a Canadian low budget horror movie,” explains Schwartzbard. “A lot of people believe it's the movie that invented the slasher film.”

Schwartzbard got involved with the film having shot Takal’s previous feature, Always Shine. Black Christmas was shot In the summer of 2019 in New Zealand with a goal of a December, Friday the 13th release. Because they were shooting a Christmas movie during the summer, the producers decided to move the shoot to New Zealand since it would be easier to re-create a winter environment. For Schwartzbard, the bigger challenge was that it was a low budget horror film with a lot of action sequences that had to be often shot with Christmas lights as his only light source.

That ‘70s “Groovy” Look
Black Christmas is the first horror film Schwartzbard has shot and although he used the original film for inspiration, he was more influenced by the 1970s films of Brian DePalma and Robert Altman, especially their use of long and slow zooms. Other films he and Takal looked at were the ‘70s films of Hal Ashby, filmmaker Luca Guadagnino’s recent 2018 remake of Suspiria, and Stanley Kubrick’s 1999 psychological drama, Eyes Wide Shut.

Schwartzbard had extensive experience shooting on VariCam, having shot Netflix series Master of None and Love with the VariCam 35. For Black Christmas, he again chose the VariCam 35 because it was the best camera to employ the vintage zoom lens he and Takal used on Always Shine. “It’s a first generation Angenieux 25-250mm zoom, which is a T-3.9,” reveals Schwartzbard. “From what I understand, it was the first long range zoom lens made for 35mm. It originally came out in 1962 and it was the only 10 to 1 zoom lens, until Cooke came out with one in the mid ‘70s. It’s has a really groovy look and right now, you can find them all over eBay.” Schwartzbard also made use of a Cooke 18-100mm lens.

Since the Angenieux zoom was pre-Super 35, Schwartzbard wouldn’t be able to cover a full-frame sensor, so the VariCam 35’s Super 35mm sized sensor was ideal and he was still able to capture a 2.39:1 aspect ratio. The zoom lens was also slow at T-3.9, so the VariCam’s 5000 ISO feature compensated a slower stop. “I prefer dialing down from 5000 Base to 3200 or maybe 4000 if I’m really in trouble,” he explains. “I usually click to 3200 and that usually gets me where I need to be.”

During testing, Schwartzbard created a viewing LUT with Technicolor LA colorist Pankaj Bajpai. “Since we were deep in the South Island of New Zealand, we did a remote session with an iPad remote viewing/grading set up,” explains Schwartzbard. “We Aspera’d Pankaj some of our test footage and we sat in our hotel room looking at an iPad while he created the LUT in Los Angeles. He developed a LUT starting with our funky lenses and filters and he made use of a lot of proprietary Technicolor emulations of photochemical processes. He came up with a really groovy look.”

Winter In July
With the VariCam 35, Schwartzbard captured 12-bit 444 2K files since Blumhouse’s delivery requirement was 2K. “We went to New Zealand for Christmas in July, but it turned out it doesn’t actually snow where we were shooting,” reveals Schwartzbard, “We made as much snow as we could afford, but we realized we would have to augment the snow in VFX. We kind of bumped up to 4K whenever VFX were involved. We were constantly switching back from 4K to 2K to save money on hard drives.”

For lighting, Schwartzbard made use of Christmas lights with one 20-minute night sequence lit
entirely with Christmas lights – both practicals and fastened to boards. According to the DP,
lighting with Christmas lights turned out to be much trickier than anticipated. “My understanding
is that incandescent twinkle lights are outlawed in the EU, which has gone over to LED,”
explains Schwartzbard. “New Zealand isn’t in the EU but it is a 240-volt country and nobody is
making 240-volt incandescent Christmas lights. All of the household LED lights we tested
strobed at one frequency or another – either 50Hhz or 60Hhz so if you had enough of them you
were likely to have a mix of frequencies so that you couldn’t dial it out with the shutter. Our
alternative was shipping a ton of incandescent Christmas lights from the U.S., which meant we
needed to run 110 power on all of our sets with the Christmas lights in addition to the 240-volt
power we were using for everything else. It became a huge pain for our electrics.”

For post-production at Technicolor LA, Schwartzbard really loved the LUT Bajpai created, so the final look was not changed much, although Bajpai cleaned it up and made the shots seamlessly match.

Although he’s a fan of American films of the ‘70s, Schwartzbard was not a ‘70s horror film buff. One of the executive producers, Couper Samuelson sat down with Schwartzbard and presented a taxonomy of classic horror movie scares. “Shooting a horror film was a great learning experience,” reveals Schwartzbard. “From the camera point of view, so much of it is about cycles of tension. There’s so much about guiding the eye, which is essentially the magic trick of creating tension. Making you think something scary is going to happen over here and then having something scary happen on the other side of the frame.

“Much of horror movies are about doors – people going out of doors, what's around the door, don't go up those stairs to the door. The door just always seems to work. I’m not sure what kind of Freudian analysis you want to slap on that.”