At AbelCine we host a number of educational events and workshops. Recently we put on a workshop for the the Producers Guild of America (PGA), which focused on new camera technology and workflows. We covered the latest cameras from Arri, AJA, Blackmagic, Canon, Panasonic, Red, and Sony, and reviewed various workflow options for each. It was an enjoyable workshop, and one that proved to be very revealing for me as well.

I was surprised to discover the high level of interest in acquiring in 4K. We all know that 4K usage is growing, but to have a room full of producers in front of me saying that they are being asked by their clients to deliver 4K really said a lot. The group wanted to understand the workflow implications of acquiring in 4K and what the cost difference would be, especially in terms of storage needs and editing complexity. So the workshop veered in that direction and led to very interesting discussion topics that I thought I’d share with you.

The first topic that came up was the data space requirements of 4K vs HD.  As producers, the group was well aware of the cost associated with hard disk space, and that recording in 4K meant they would need more of it. Being four times the resolution of HD, 4K is certainly larger than most HD formats, but they wanted to better understand just how much bigger it is.

To compare the numbers I made up this little chart with several 4K formats and the most popular HD formats - ProRes 422HQ and MPEG2 422 (XDCAM / Canon XF Format).  These two HD formats are in red, the rest are all 4k. 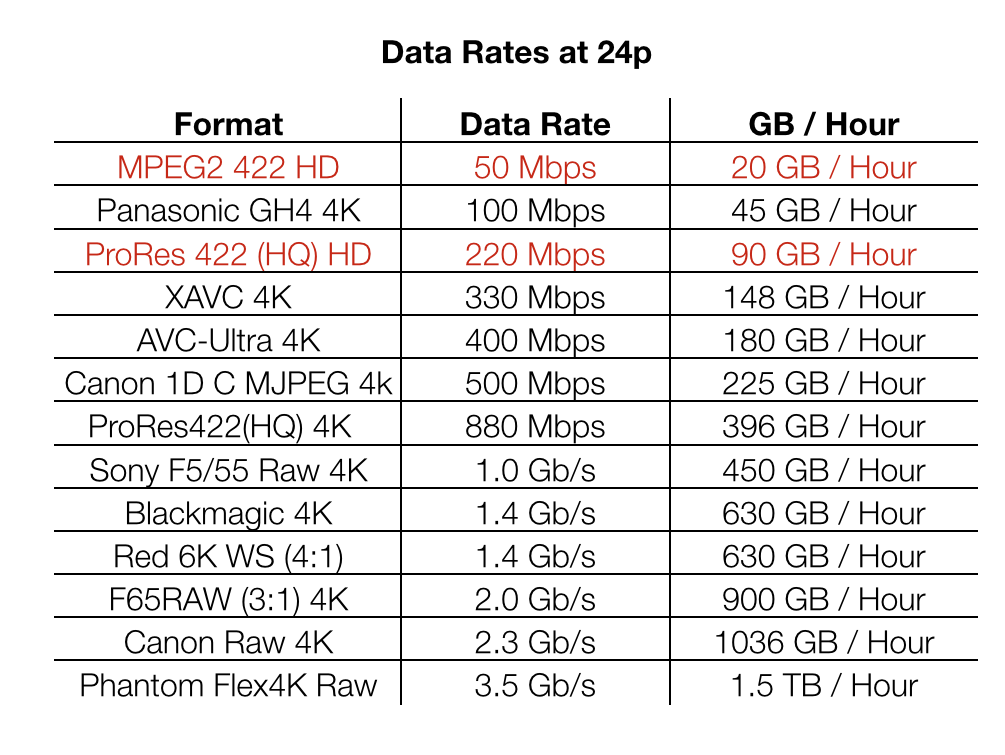 As you can see from the chart, the 4K Raw formats can get pretty heavy in terms of file size, with the highest quality formats coming in between 500 GB and 1 TB per hour. Even with the cost of hard drives dropping all the time, that’s still a lot of data. The advantages of shooting in those high-quality Raw formats are many, so the cost associated with it can be well worth it. However looking back at the chart, you’ll see some 4K video options that aren’t half bad. New 4K video formats like XAVC 4K from Sony and AVC Ultra 4K from Panasonic are coming in at fairly reasonable data rates. At around 400 Mbps, that’s not much heavier than shooting in the popular ProRes 4444 format. What’s more, these new formats are known for being very good quality overall.  Shooting in these formats still doubles your data space requirements compared to ProRes 422HQ, but that’s very reasonable compared to a 6 to 10x increase when shooting in 4K Raw formats.

The producers in the room were intrigued by the possibilities of the new formats, but were still not sure about the workflow. Editing in 4K wasn’t something they were envisioning just yet.

The latest versions of Apple Final Cut Pro, Adobe Premiere, and AVID all support 4K in one way or another. However there is still a long road for many post facilities to have all their editing bays ‘4K Ready.’ So one of the topics that came up in our conversation was recording simultaneously in both 4K and in HD.  The group preferred HD for editorial and 4K for finishing and future proofing.

That’s the idea behind the proxy recording options in many of the cameras coming out today. For instance, both the Sony F5/F55 and the new Panasonic VariCam cameras offer the ability to record in 4K (video or Raw) and HD at the same time. The F5/F55 can record in their XAVC 4k format with a MPEG2 422 HD proxy recording simultaneously (image below). The VariCam takes that a step further, giving you AVC-Ultra 4K on one card, AVC-Intra HD (422 HD video) on another, and even a third very small low-resolution recording for sharing over the internet. The HD proxy formats are good editing formats, and meet the standards for broadcast.  In addition, the proxy recordings have the same file names as their 4K counterparts, so they can be easily matched back after editing.

Beyond the Sony and Panasonic cameras, many others are designed to output to external recorders to create the same workflow. Cameras like the Canon C500, Red Epic/Dragon, Sony FS700 and others can be combined with external recorders to create both 4K and HD clips with matched file names. Recorders such as Convergent Design’s Odyssey7 & 7Q, AJA’s KiPro recorders, Atomos recorders, and the Video Devices PIX recorders, all have this ability with a variety of cameras. 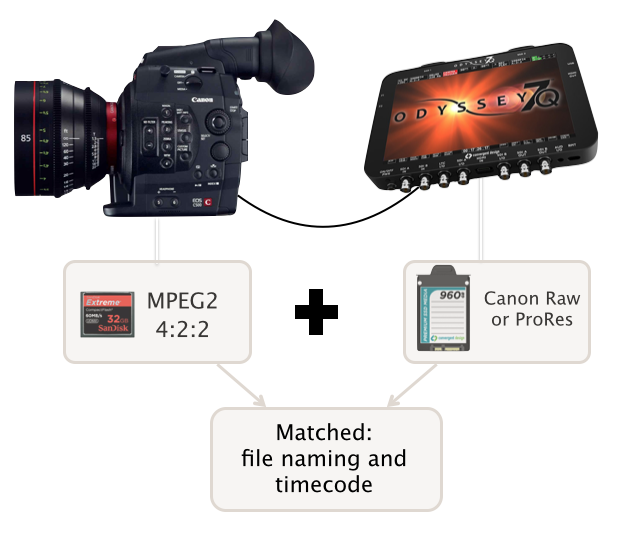 The idea of shooting in 4K with proxy recording was really appealing to this group of producers. They need to be future proof, but don’t necessarily have the budget or facilities to edit in 4K today.

Many producers in the group also asked about the ability to record a ‘look’ on top of the proxy recording. They wanted their 4K recording to be either Log video or Raw, but have their HD proxy material look pretty much like what they saw on set. This is also possible in many of these new 4K cameras. The F5/F55, FS700, VariCam, C500, and Red cameras all have the ability to ‘bake in’ a look on the proxy recording while leaving the 4K recording clean. 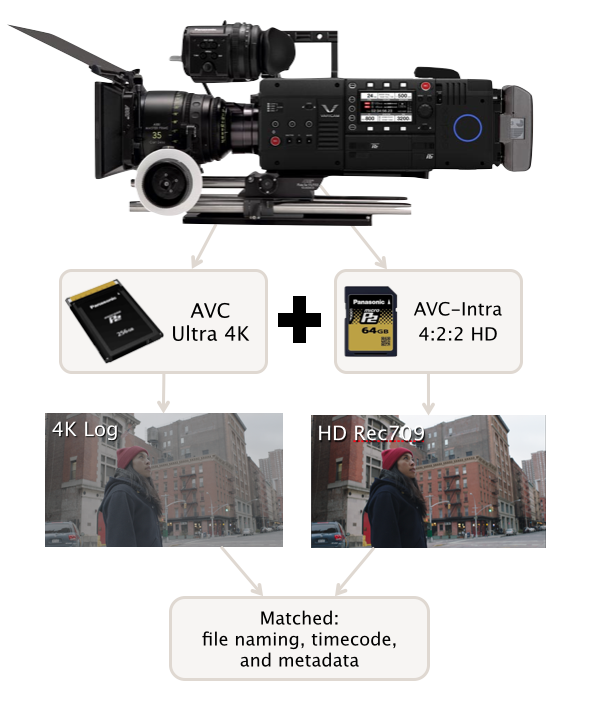 In the image above, you can see the 4K recording is in a flat log format (easy to grade in post), but the HD recording has a Look Up Table (LUT) applied. This means that the HD proxy can look exactly as it did when created on set.

Having discussed this option, many of the producers ask if this HD proxy with a look applied could work as dailies.  Dailies have been generally produced in post from the original camera material and sent out in a variety of formats. Now, some of these new cameras can enable you to reduce or even skip this process. What’s missing is the syncing of audio, the addition of titles, and the general clean up that normally comes with the dailies process. There isn’t a complete substitute for that yet, but there is no doubt that cameras are developing in that direction.

I was very impressed by this group of PGA members. They seemed both willing and excited to shoot in 4K on one of their upcoming productions. This is a big change from what I’ve heard in the past, and signifies to me that the demand is growing. Many of the producers responded favorably to the availability of proxy recording and the new 4K video formats.  These new options really open the possibilities and ease of entry into 4K acquisition. New cameras like Sony’s F5/F55, Panasonic’s VariCam, and Canon’s C500 are all designed to enables these workflows. It sets them apart from some of the less expensive 4K cameras appearing today, though certainly products like the AJA Cion and Blackmagic’s 4K cameras will increase the overall number of productions shooting in 4K.

By the end of the workshop I have to admit, there were just as many producers in the room that still weren’t ready for 4K. Some just didn’t need it, some couldn’t handle the amount of data storage required, and others simply did not have their clients asking them to deliver it. Whatever side of 4K you and your clients are currently on, the good news is that 4k is now more a reality than ever before, and we have many tools out there to enable it across a wide variety of productions.

Andy Shipsides is AbelCine’s Director of Education. He received his B.A. from the University of Florida and received his MFA in Film & Television from SCAD. Andy joined AbelCine in 2007 and has become a trusted resource, both within the company and in the industry at large. As a Camera Technology Specialist, he has provided technical support to numerous features and TV shows; he also continues to teach specialized camera classes. Andy serves as a Technical Editor for CineTechnica, AbelCine’s technical blog, and is also an active contributor to publications such as HD Video Pro. Follow Andy on Twitter: @AndyShipsides