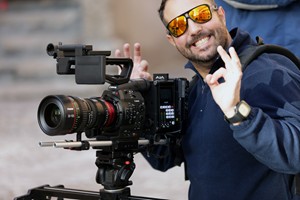 A passion for music and keen sense of artistry sparked Aldo Ricci’s early interest in cinematography. After receiving a DSLR camera as a gift from his wife, he began capturing the world around him and quickly uncovered a natural talent for filmmaking. In 2010, Ricci founded ARProductions, a Noci-based production company that creates short films, commercials and more. For Ricci’s latest 4K short films, "Abruzzo Winter Emotion" and "One Day in Abruzzo," he used an AJA Ki Pro Quad 4K/UHD/2K/HD file-based recorder with the Canon EOS C500 camera to deliver stunning 4K ProRes 444 footage of central Italy’s most breathtaking topography.

"Ki Pro Quad allowed us to seamlessly record in 4K ProRes to external media and was absolutely invaluable on these projects. It also gave us added flexibility and peace of mind, with the ability to record in HD, 2K or 4K, if the need arose," shared Ricci."Throughout production, the Quad withstood the rigors of the field and really lived up to its reputation as a rugged and reliable device."

With an AJA Ki Pro Quad mounted to the Canon C500, Ricci and his crew recorded 4096x2160 4K ProRes 444 files onto SSD-based AJA Pak drives. Once production wrapped, the files were loaded onto an iMac via the Thunderbolt-enabled AJA Pak Dock reader. The team then edited the films in Adobe® Premiere Pro ® and used Adobe® SpeedGrade® for final color correction.

Impressed by the range of additional options that the 4K footage afforded the team in post production, Ricci shared, "The fact that we could shoot 4K ProRes with a rich color gamut in 4:4:4 proved to be a tremendous asset for editorial and color grading. It gave us a diverse range of options during editing and color grading that otherwise wouldn’t have been possible."

Ki Pro Quad is AJA’s compact, solid-state recorder that enables 4K/UltraHD and 2K/HD workflows and easily mounts to a variety of cameras. When paired with the Canon EOS C500, it accepts 4K RAW output over SDI as a data stream and performs real-time debayering (the reordering of sensor data into recognizable RGB images) to record footage in ProRes 444 or ProRes 422. Encoded files are stored on AJA Pak modules (256GB or 512GB removable SSDs), which can be plugged into an AJA Pak Dock Thunderbolt and USB 3.0 reader, and uploaded to compatible computers for instant use with non-linear editing solutions from Apple, Adobe, Avid, Autodesk and more.


About AJA Video Systems, Inc.
Since 1993, AJA Video has been a leading manufacturer of high-quality and cost-effective digital video interface, conversion, acquisition and desktop solutions supporting the professional broadcast and post- production markets. With headquarters in Grass Valley, California, AJA maintains an extensive sales channel of dealers and systems integrators around the world. For further information visit www.aja.com.