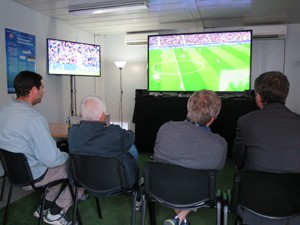 The Champions League Final gave UEFA a chance to showcase 4K and Ultra HD, courtesy of a closed-circuit production that made use of Telegenic’s T25 OB and its four Sony F55 cameras coupled with Fuji prime cinema lenses and an Chrosziel adapter that allows full iris and focus control.
"We’ve learned that there is no difference between HD and 4K which is brilliant for the production teams as there is no difference in how they work," says Eamonn Curtin, Telegenic, commercial manager.

There were, however, some modifications made to the production as the goal was to give Champions League rights holders a chance to evaluate pure 4K images in the production compound. The use of true 4K cine lenses is one such modification and there were also no DVE moves or wipes.

"We kept it clean and simple to showcase the wow factor of 4K images on the 90-inch Sony 4K screen [in the UEFA Digital Media Showcase area]," adds Curtin. "It’s a true 4K workflow all the way through."

"We could have gone for more cameras and we will be for productions later in the year but these are our own systems," says Curtin. "And what’s been proven is that you can sit on the camera one shot because it’s one hell of a shot and you don’t mind staying on it."
There also were not any super slo-mo cameras but EVS replay servers did allow for regular replays.

"We also trialed the Sony 4K server for iso recording and it records one 4K file so you don’t need to sync four video signals and can edit just the one signal," adds Curtin.

Curtin’s reference to future productions that will include more than four cameras includes what will arguably be the most important 4K production to date when it happens: next month’s FIFA World Cup in Brazil.

Last summer Telegenic’s T25 OB unit made the trip to Brazil for the Confederations Cup for 4K tests in Belo Horizonte. But next month the plans will be modified a bit as the T25 is already booked for other productions in the UK meaning that the Telegenic team will call a production unit from Brazilian-based Globosat home for the productions.

Ken Kerschbaumer has been editorial director of the Sports Video Group since 2005 and has been writing about how sports networks and leagues use video and audio technology to deliver a quality TV experience since 1991. He began his career in 1991 at Television Broadcast magazine before joining Cahners where he was editor of Digital Broadcasting magazine. In 2000 he joined Broadcasting & Cable magazine as Senior Editor of Technology. Seven years later he helped co-found the Sports Video Group with Paul Gallo and Marty Porter.