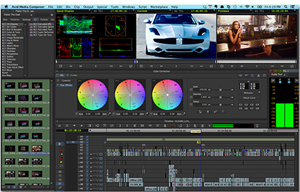 By 2014, 4K moved beyond early trade-show rumblings to become a dominant player in the world of acquisition formats. There are many advantages to shooting 4K including increased creative flexibility to zoom and reframe shots in post, higher quality keying & 3D capabilities and a more secure medium for archiving purposes.  However, while the shift from SD to HD took almost 10 years to take hold, the move from HD to 2K to 4K is happening in less than half that time. As a result, cameras, formats and codecs seem to advance on a monthly basis, while post production editorial solutions for 4K are evolving at a comparative snail’s pace.

I believe this is partly due to the fact that delivery requirements rarely include a 4K output. 4K monitors are few and far between and 1080p or 2K is still the preferred delivery format. While there are many options to acquire 4K (even on the consumer side GoPro’s HERO3+ can now capture 4K at 15 or 12 fps,) the post workflow is still playing catch-up and solutions usually include using multiple applications along with an online/offline workflow to get to a 4K output.

Avid Media Composer is one of the most common NLEs for film and TV editors and has some well established workflows for 4K. However, Avid’s path from HD to 4K is still evolving. This past year Avid announced that its only 4K finishing solution, the Avid DS, would be discontinued and issued an end-of-life (EOL) statement for Avid DS:

"To Our Avid DS customers, We are writing to inform you that Avid will be realigning our business strategy to focus on a core suite of products to best leverage our developmental and creative resources. As part of this transition, we will be ceasing future development of Avid DS with a final sale date of September 30th, 2013"

Currently the latest version of Media Composer cannot output resolutions higher than HD 1920 x1080; which is just under a 2K size image. Why would Avid want to discontinue its only truly “resolution independent” editing system, especially at a time when 2K and 4K are becoming more common? The answer depends of course on who you speak to. From Avid’s perspective it is streamlining its resources to focus on a core suite of creative products, which I imagine will eventually include options for 4K finishing.

There are however, a number of options out there  - mostly involving using a third party software outside of avid - that get the job done. Workflow is very much dependant on whether you need to go back to the original 4K files to reconform.  In this case Avid functions as an offline platform. If you plan to finish and deliver in an HD output,  Avid serves as both an offline and online tool.

In the case of R3D files, Avid’s options are to transcode to proxies (DNxHD 36 for example) or Intermediaries (DNxHD 220x) for editing.  Third party software used for this is typically Redcine-X Pro or Avid MetaFuze.

Instead of transcoding your footage outside of Avid, you can use the AMA Link option to link directly to the R3D files and transcode within Avid. As long as the R3D Plug-in is installed, you can link directly to the R3D files and start editing. Though technically you can edit with the R3D files, most computers cannot handle the large file size and the standard practice is to transcode. Avid recently included some new features in Media Composer 7, one being the FrameFlex which can be used to define an HD region of interest within your 4K files. LUTs can be applied through source settings and the media creation settings can be used to adjust the RED debayer parameters.

If you are working with Proxies and need to go back to the R3D files, exporting an EDL to Redcine-X Pro is also an option. You can do further color grading within RED’s software or transcode to DPX. Blackmagic Design’s DaVinci Resolve is also a great solution for grading and finishing in 4K. Once the sequence is picture locked, the sequence will need to be relinked back to the original files and exported via AAF.

Currently, Avid has some great solutions if your goal is to finish in 1080p, but if your final deliverable needs to be 4K you’ll have to go outside of Avid’s ecosystem. It is a continually evolving process which I suspect will see Media Composer and Symphony moving towards resolution independence and 4K finishing within the near future.

Janet is currently the Director of Education at Manhattan Edit Workshop (MEWShop). She is also an editor and film educator who has been in the film and video world for over 15 years. She first became interested in film while studying audio engineering at The New School. Since then she has edited for PBS, MTV, CNBC and taught classes at NYU, Columbia and the New School.