Introducing The World to 4K 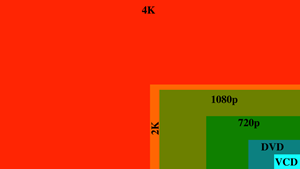 It’s not just for the futurists and nerds anymore

Earlier this week I participated in a panel discussion regarding the history and future of 4K video production: its benefits, drawbacks, and considerations - particularly for the world of broadcast. What I found to be most interesting about the discussion is the fact that more people aren’t taking advantage of 4K or even in a position to know its pros and cons. I’ve personally been wrapped up in my own 4K bubble for years ever since the RED One was first announced. Two of my friends had ordered their own REDs on day one and as soon as they arrived in Toronto I was shooting, and posting 4K projects. Back then, the cameras were still few and far between, shipping in low numbers, with a workflow that was complicated and inefficient. Contrast that to today and all of the major camera manufacturers have affordable 4K shooting solutions, the latest phones come with 4K shooting modes, and all of the popular NLE systems support 4K and RAW formats with drag-and-drop level ease. Because of the fact that more people aren’t fully aware of the advantages of 4K, I will do my best to break them down fast and furiously right here.

4K protects your ability to take a project from it's modest beginnings to something more ambitious. After viewing well-shot 4K footage on a 4K monitor it really does come across as looking through a window into another world. But that doesn’t mean that 4K acquisition is only useful for 4K viewing. 4K is extremely handy in scenarios where a crew is limited in the number of cameras they can set up at once, or when trying to cover large areas. Plenty of times I have seen a 4K frame of an interviewer and subject cropped into two distinct 1080p frames.

Obviously having multiple cameras and angles in play is preferred but for smaller setups requiring fewer people a situation like this is extremely useful. Sporting events including The World Cup are making the jump to 4K acquisition and workflow as well. Being able to zoom in on players’ hands, or the ball in the far distance to judge a call is extremely liberating and ridiculously cool! Additionally, downscaling 4K frames down to 1080p or even 2K is a great tool when trying to stabilize handheld shots since it is the most efficient fix is cropping into the image. When doing this with a lower resolution image but still delivering in 1080p, the frame could end up being of lower quality/fuzzy/etc.

Another advantage of 4K is that of VFX workflows. Sampling debates aside - a 4K 4:4:4 file will give you a much better image quality than a 2K 4:4:4 file. When working with 4K files, tasks such as keying, and tracking becomes much easier - especially after downscaling to 2K resolution since the image will inevitably become more sharp.

The bottom line is that 4K is here, and it is everywhere! Most computers that have been sold in the last year, game consoles, and Blu Ray players all support the standard. Televisions and monitors are here and dropping in price rapidly while adding features for playing back higher frame rates, better color reproduction, and brightness. Soon we will have really bright, glasses-free 3D televisions in 4K. Astounding! Considering the fact that post-production hardware companies like AJA, and Blackmagic have entered the fray with 4K capable camera systems that go toe-to-toe with the heavyweights like RED, Sony, and Canon, there has never been a more exciting time to learn and experiment with 4K. On the lowest end of the spectrum, a Samsung Galaxy S5 or Sony Xperia Z2 phone will even shoot in 4K! I encourage those of you that haven’t touched 4K footage before to download samples from the various camera manufacturers, or even from Vimeo, drop it into a timeline in your favorite NLE and take a look at the quality. Reframe, crop, stabilize, mask, and key the footage. It really opens up new dimensions to your offerings as a professional creative and acts as an indispensable, future-proofed tool in your toolbox!

Andre Elijah is an editor and post-production consultant that specializes in the world of RED and 4K. Having worked on productions all over the world with clients ranging from Sony to Radio & Television Hong Kong to Beyonce - Andre has a wealth of knowledge, and practical experience in the 4K space. Currently Andre is in charge of producing content for AOTG.com - the world's largest online community for post-production.