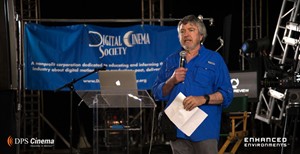 The Digital Cinema Society’s August event warmed up “THE GRID Los Angeles”, a 33’ x 60’ x 61.9’ staging and production space at DPS for an in-depth look at DPS Cinema’s Enhanced Environments process along with Panasonic’s VariCam35 and Codex’s new V-Raw Recorder—all in 4K.

With his hallmark warm verve, DCS founder James Mathers, kicked off the morning, introducing DPS General Manager R.J. Lynn and Paul Kobelja, VP of DPS Cinema. To explain his Enhanced Environment process Kobelja gave a brief historical glimpse of the visual effects methods that led to today’s process being used on features like Oblivion, and Disney’s Tomorrowland. But it was the live demonstration of 4K real-time practical photo realistic virtual sets with computer driven interactive lighting enveloping live subjects that really engaged the audience of filmmakers. 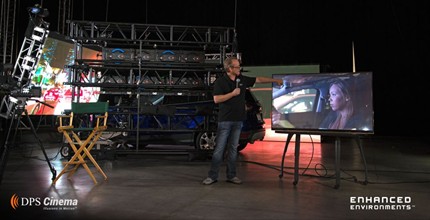 To demonstrate vehicular amplification with Enhanced Environments, pre-filmed imagery filled 9’ by 12’ LED screens set up facing 4 sides of a car. Moving reflections encased the car, lighting the interior and the actor within. An audible “awww” was heard when the actor rolled down her side window eliminating the dense moving reflections, exposing realistic exterior colors within the car. The effect was captured by the VariCam35 and displayed on 4K monitors. 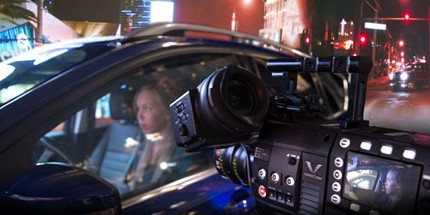 For this hands-on crowd, cinematographer Bobby Finley III, VP of DPS Cinema Technologies (who worked in the Visual Effects Department on Raiders of the Lost Ark, Star Wars: Episode VI - Return of the Jedi, and upcoming The Jungle Book), and Andrew Jones, award-winning Production Designer, (known for his work on Avatar, Alice in Wonderland, and Oz the Great and Powerful) took the stage together for a discussion on their firsthand experiences on productions using the Enhanced Environment process. Their enthusiasm gave rise to a lively Q&A with the audience. 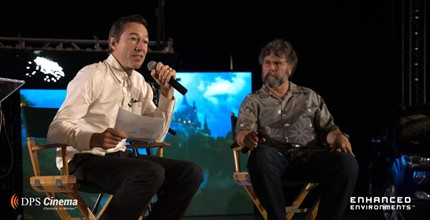 Next up was Panasonic’s Aaron Latham-James, for a rundown on the latest features and updates to the VariCam35, known for its amazing latitude, wide color gamut, 4K resolution, in-camera color grading, modular design and dual-codec recording.

Brian Gaffney, SVP of Codex Technologies, appropriately followed with an in-depth presentation on the new Codex V-Raw recorder, and its union with the VariCam35. According to Gaffney, “With the introduction of the Codex VRAW recorder for the Panasonic Varicam35, Codex builds upon a rock solid workflow for on-set data capture, cloning and archival. The Codex Vault Production Suite allows for processing uncompressed 4K VRAW files up to 120 fps directly on a MacPro or Codex Vault, into 4K and 2K ProRes files, or 10 and 16 bit DPX files, and to render out color-corrected, sound-synced Avid DNX media and H.264 files with burn-ins. It adeptly completes the entire workflow for this camera.” When Mathers concluded the meeting, attendees were invited to get their hands-on the Panasonic Varicam 35, Codex, and filled the stage to experience the DPS Enhanced Environment set.