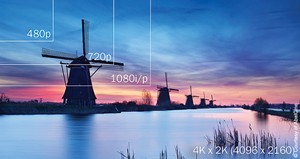 With a resolution almost four times as large as the current HD standard 1080p, the 4K technologies are creating a new experience in HD video. Also referred to as Ultra High Definition, 4K’s details are so sharp and in your face that it feels like they are bursting off the screen. This type of video capture is becoming the standard in Hollywood, and it is now possible for prosumer videographers to purchase 4K cameras and consumers to invest in a 4K TV themselves.

With how new this technology is, there are many misconceptions that have come to the surface. To try and get to the bottom of this, we’ve analyzed the top five misconceptions surrounding 4K.

4K is pretty much the same as HD, right?
Nope. There is a huge difference in viewing qualities between HD and 4K. It all comes down to the pixels. With over double the pixel count, 4K is on another level. The 4K image is much more crisp and life like.  Hollywood has been on the 4K band wagon for a while now, and it’s so crisp even the makeup for actors needs to be changed. The crisper image causes every pore on an actor's face to be seen and critiqued. Remember the “gossip” surrounding Cameron Diaz when 4K started being produced?  I think she would agree, 4K is better. Sorry Cameron.

4K on a small screen is useless, right?
It’s been said time and time again that viewing 4K on a smaller screen is silly. And while screen size does matter to a certain point, 4K images are still superior to HD even when viewed on an HD screen. When 4K is down converted into HD, the images still look better than if they were originally produced in HD. Even without all the pixels, a 4K image has a more aesthetically pleasing viewing experience than an HD image. I’ll admit, it’s not as huge of difference as the transition from SD to HD, but if you appreciate image quality, you will notice the difference. Conversely, if you’re like my parents who for some reason are still happy watching SD cable channels with their HD cable subscription, then don’t bother. But if you’re into a high quality image, you should definitely get one.

4K on a smaller screen is great for the videographer too. You can reframe your shots and zoom in up to 50% and still have a good quality image. You can shoot one interview in 4K and give the illusion of having two cameras. Plus you can make framing tweaks in post which is convenient. Not that I’ve ever had to do that because all of my shots are perfect *wink*.  As long as you outputting 1080p, you’re all good.

Seriously...there is nothing to watch in 4K.
While there is not an over abundance of 4K available today, the top video producers are all moving to a 4K standard. Movies such as The Hobbit, Contagion, and Jurassic World were filmed in 4K and many television shows also are being produced in 4K as well. Netflix originals, House of Cards and Arrested Development Season 4 are available in 4K. Amazon also is looking into producing 4K content for their original shows. HD is still the ruler of most streaming and broadcast content, but in a few years, most new production will be available in 4K.

There are options for uploading and viewing 4K content on Vimeo and YouTube now as well. Thanks to those channels streaming in 4K, it makes sense for the small production houses and videographers to produce content in 4K too. It’s up to us to start producing our content in 4K and not just wait for the marketing hot shots in the big office somewhere at the top of some skyscraper to tell us when it’s OK. I don’t know about you, but I’m ready to take the leap!  For all of Greece! For SPARTA! Wait...what, sorry.  I got a little excited there.

OK so I can watch it, but dude, streaming can’t support 4K
Live 4K streams can be compressed down to less than 20mbps. That’s still much heavier than a HD live stream which is typically 6mbps, and too burdensome for most home broadband connections. However, websites such as YouTube can support 4K videos and Google has created a new service provider, Google Fiber that will make it easier to stream 4K videos. Google Fiber starts with a connection thats up to 1,000mbps. A bigger pipe means less compression which allows the network to stream 4K much easier.

My camera says it’s 4K, I’m in!
The last misconception that is common for 4K is the mislabeling of cameras that say they shoot in 4K. Yep, sorry to say not all cameras are created equal, but if you’re reading this, I’m sure you know that by now. As we saw with the rise of HD, most cameras started to advertise that they shot in HD, and now they all advertise 4K capabilities. Shocker! Thanks fat cat marketing guys! Just because it has the pixel capabilities for 4K doesn’t mean that it will produce a great image. Many other factors are at play to create a stunning 4K video, such as the sensor, dynamic range and compression. Make sure you weigh out all of the tech specs of your 4K camera before you purchase.

The technology of 4K is still relatively new. It’s in a transformation stage from being exclusive to Hollywood productions to becoming an everyday product in households. We can expect the rollout of 4K TV’s and cameras to progress, and industry leaders, as well as smaller production companies, to be producing more content in 4K.  Great for most us! But I’m sure no matter what happens my parents will still be watching SD on their HD and 4K cable channels.