Catch up with Andy Liebman, EditShare's CEO (photoed here) as he tell us his thoughts on 4K and beyond. 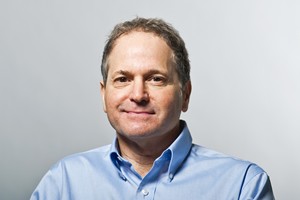 Any other EditShare products that work with 4K?
Our media asset management solution, EditShare Flow, will support 4K in the near future. This will let you make proxy files of your 4K footage, and track 4K assets throughout the production process. Our integrated archiving solution, EditShare Ark, is already 4K compatible, and can back up and restore your 4K footage to/from LTO tape or disk. In the near future, once Flow is 4K aware, you’ll also be able to preview and bring specific individual 4K files back from the archive from Flow.
Why is it a must for production professionals working with 4K to use EditShare's 40-Gigabit Ethernet and 10-Gigabit Ethernet solutions?
4K is everywhere these days. When someone says they are working in 4K, it could be one of dozens of different scenarios, and the only way to effectively support the full range of 4K workflows is by investing in a scalable infrastructure that can be configured to meet any of these demands.

This is what EditShare is all about.

EditShare Shared Storage is a scalable platform that can be easily configured to meet the varied demands of 4K workflows. Some 4K workflows such as compressed 4K can be enabled with a 10-Gigabit network infrastructure linking your workstations to your EditShare server, especially if you have just a couple editors working at this resolution and each of them is playing only one stream. For example, the data rate of 4K UltraHD at 30p in ProRes 4444 is 165 MB (megabytes) per second, easily supported with your EditShare server and workstation both connected via 10-Gigabit. The same goes for 4K editing in CinemaDNG (and we suspect DNxHD in the near future).


However, if your workflow calls for multiple editors sharing compressed or uncompressed 4K footage or each working with multiple 4K streams, you will likely need more bandwidth between your storage server and your switch than a single 10-Gigabit connection can accommodate, even if all of your workstations are only 10-Gigabit attached. While bonding multiple 10-Gigabit interfaces from server to switch is a supported option, it has some drawbacks including cost, complexity, and the number of required PCIe slots for network cards.

In this scenario, utilizing a single 40-Gigabit connection between server and switch is a clean solution that will give you the performance required to support the aggregate bandwidth needs of your 10-Gig attached workstations, without the complexity and overhead of bonding.

Lastly, where 40-Gigabit Ethernet really shines is in its ability to support uncompressed or RAW 4K workflows. Here, the data rates to each editing workstation jump up significantly. For example, a single, full-aperture 4K frame in a DPX sequence is 48MB, resulting in a whopping data rate of 1,150 MB/sec at 24fps. To support editing 4K at these types of uncompressed data rates (whether in single-file-per-clip formats like QuickTime or single-file-per-frame formats like DPX), you’ll need a 40-Gigabit connection directly to your workstation.

Also, formats such as DPX – in which each frame of video is stored as a separate file – are much more demanding on your storage and network infrastructure than an equivalent data rate in a single file format like QuickTime or MXF. This makes 40-Gigabit networking all the more critical. In addition, EditShare’s proprietary optimizations for DPX editing make it easier for the system to support opening many files in rapid succession.


With EditShare, it’s easy to upgrade your existing storage server to support 40-Gigabit Ethernet—there is no need to invest in an entirely new storage platform. You can reconfigure you system from 10-Gigabit to 40-Gigabit by simply swapping out the Ethernet switch and network cards. It’s also likely that you’ll need more drives to support the performance and/or capacity needs of 4K video, and EditShare is very scalable in this regard as well.
Where do you see the future of 4K headed?
Many people ask, “Why do we need to shoot in 4K when we are distributing in 720p or 1080i?” It quadruples storage needs and render times. Regardless of these obstacles, 4K is here to stay, and there are a number of reasons why.

With 4K, the final product looks better. Today’s 4K cameras also give you the flexibility to crop the image in post to get super-tight shots. They offer better color correction and reframing capabilities, and most importantly, an easy way to save high-quality material for long-term use. The future-proof aspect of 4K is attractive to just about anyone - whether you deliver in it or not. Also, the data and specifically video handling capabilities of broadcast servers and consumption platforms such as tablets and Ultra-HDTV’s are evolving quickly. Given the relatively low cost of 4K and UltraHD cameras, the stunning quality you can achieve with H.264 and H.265 compression, and the reasonable prices of 4K-capable display screens, I’m sure we will soon see whole new 4K-only TV channels sprouting up over the next year or two. They will distribute via cable or more likely through the web.
Will EditShare be at any other shows this year? If so, which ones?
We have plans to exhibit / present at the following industry trade shows and regional events:

You can learn more about EditShare products at www.editshare.com
Want to learn more about Andy Leibman?
Andy Liebman is the founder and CEO of EditShare. An Emmy Award-winning filmmaker, Andy spent nearly two decades in film and video producing projects for Discovery Channel and PBS. In 2003, Andy developed the first EditShare shared storage system in response to a media-sharing problem faced while working on a project in the arctic for Discovery Channel. The innovative shared storage solution allowed multiple editors to collaborate on the same project, providing an affordable and more efficient workflow for media sharing in post. Since then, Andy has grown EditShare – both the company and product line – into a global brand offering tapeless, end-to-end workflow solutions for post-production, TV and film. Andy continues to work closely with the production and post-production communities to build collaborative, file-based workflows that revolutionize the industry. Today, the company boasts more than 3,000 worldwide installations of EditShare production and shared storage servers and over one million downloads of its Lightworks video editing software.