Learn what Gary Adcock thinks is going on now from his perspective with all the latest tech and its adoption. 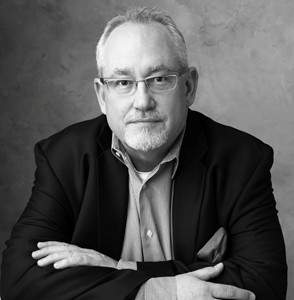 Where is 4K most implemented — and what will take hold next year or after?
In my world, I have been delivering 4K content for Convention Displays and other uses for over 4 years. I think people have been too focused on 4K broadcast, I personally don’t see that streaming live for a few years, even the 4K version of House of Cards on Netflix has only seen a few thousand downloads. I am one of those that thinks I will see 4K movie downloads long before I see a 4K version of the local news. Yet that poses a different issue, if a current HD movie download is about 5GB, what does that mean for the internet providers when we start DL’ing 20-30GB files for a 3 hour feature?
So everything seems 4K-focused right now. What’s really going on now from your perspective with all the latest tech and its adoption?
This is the build up, as with any new construction, there needs to be a formal groundbreaking and what we are seeing is the pre-construction hoop-la about 4K. We are really at the Chicken or the Egg stage right now. Without the tools it’s hard to create the content, but without the content it is hard to sell the product. CES 2014 was like that, everyone was talking UltraHD and QuadHD but most of the content was stop motion still photos because they were the easiest to create. One thing that will really make a difference in the future is how do we connect to all of the devices and media necessary for a 4K future? We start talking 4K and we are at 4x HD’s data rates, add to the HighFrameRate or HFR with 2.5 to as much as 5x as many frames and we will quickly decimate the existing post infrastructure. For me nothing is more exciting that Thunderbolt, now available on PC’s and Mac’s with data throughput in excess of a Gigabyte per second on a laptop.
Where are viewers or consumers of media most enjoying the 4K experience?
Conventions would be first, Custom display signage would be second. I would never tell anyone to head to one of the big box retailers to look at 4K, because most of it is not, since most stores do not have the physical resources to playback 4K.
Conventions also allow you to optimize the viewing experience, one project where the designer restricted the viewing area to be between 6-10 ft from a 100” display allowed us to control the imagery for maximum effect. The problem is that from the viewing distance most people watch TV from most people cannot tell the difference between 4K and HD.
* Are there any 4K products on the market you have a keen interest in? Why?
Thunderbolt.
How else is all this content going to be handled? It’s current version is faster than USB3, includes all protocols for Ethernet, Fibre, and SAS connectivity, extends the PCIe bus and does it all without additional, expensive HBA’s, using just a single cable to connect between devices.
It will simplify connectivity more than anything else has, with a power we have never had access to on the desktop level. Desktop storage has finally reached speeds that are faster than all but a couple of the previous interfaces we have used in production and post. Thunderbolt is going to allow that next generation of filmmakers to handle the massive data requirements for 4K and beyond. in a simple, easy to connect manner, without needing 3 additional people to maintain the IT infrastructure.