Atlanta-born, Jewish-raised Feinberg once made a nice living in Los Angeles, playing big, bad-looking meanies (bikers, demons, etc.) on shows like “Buffy the Vampire Slayer” and “Charmed,” and now, he’s helming a family holiday picture called SANTA’S BOOT CAMP starring a bunch of kids with a cameo by Academy Award nominee Eric Roberts. Feinberg is eager to spread the message of SANTA’S BOOT CAMP – that when young people put their best effort forward, they can do anything – which is delivered both on screen by the kids who come together to save Christmas, and off-screen by the talented young artists who bring their characters and the story to such vivid life. 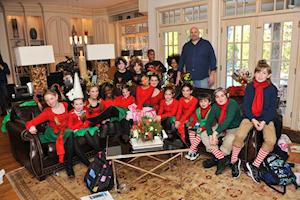 You played big, bad characters on shows like Buffy the Vampire Slayer and Charmed, but how did you finally break away from being typcasted?
I just came to a point in my career where I said this wasn't fun anymore playing the mean killers and hateful raging characters. I made some money playing those characters, however as a classically trained actor, after a while I wanted to seek something else to creatively nurture my artistic side.
For any actor that is experiencing being typcasted, what advice do you have? How do you break away from that?
I highly encourage typecasting because it makes it easier for people to cast you. Unfortunately, for me I always wanted to play the role of puck, but soon realized I would never get cast as puck. The business is predicated on what you look like, unfortunately. When I train actors, I encourage them to "know their type" to make it easier for them to book roles. Once an actor makes a name for themselves, then they can branch out and do different kinds of characters. But you want to be known for something, and being something close to who you are and naturally makes it easier for you to get a job. I called congruency between your look and your personality.
Describe the Creative Studios of Atlanta Film Academy and how that came about.
When I came back to Atlanta, I opened up a studio to help train actors book jobs in acting. I wanted to pass along all the information I have gathered for 20 years as an actor in New York and Los Angeles. Some of the actors have gone on to become stars, some of the actors have going on to be working actors, and some are not acting anymore. We started The CSA film Academy eight years ago when a colleague of mine suggested to me that I train kids. I said if I'm going to train kids number one they have to be serious about learning the business and working as an actor. I did not want the class to be playtime and I did not want to be a babysitter. And since that time we've had some great actors come through the program and learn/develop their craft in their personality.
What's the experience like having your students produce films?
I think it's great. I encourage it. One teen student just wrote directed and starred in her own feature film.
What courses do you teach?
I primarily teach film acting which includes audition skills, performance on camera and business of working as an actor. I also teach screenwriting, directing and producing.
How do they learn to produce these films?
We produce original films every year for our actors to get on set of experience so they are better prepared for the real thing. Many of them volunteer to be on the crew.
And how are they able to go on to obtain future jobs in the industry?
Showing up and being prepared are 2 of the biggest skills learned in the CSA Film Academy. So, practicing that on other sets creates a reputation of people wanting to work with you. Many jobs in our industry come from people knowing you, your work, your attitude and your personality. If you're good at what you do and people like being around you, chances are good that they'll want to work with you. Many producers and directors work with he same teams over and over.
Explain a little about your most recent film, "Santa's Boot Camp" and describe the production process behind it.
Santa's Boot Camp is a films about what happens when Santa's elves go on strike because children become so bratty, self-centered and entitled. When they walk out, Santa becomes so desperate that he brings in 6 not so nice teenagers to help save Christmas. It stars over 50 young actors all trained at the CSA Film Academy, Santa Claus and Eric Roberts. It's a fun film. It's a story that hasn't been told and it took us a few years to make. We made it so our actors could get valuable on set experience. Many of the actors in he film have gone on to work in such films as "12 Years a Slave," "Hunger Games" movies, "The Walking Dead," Nickelodeon's "Ricky, Nicky, Dicky and Dawn," and many more.
What does the future hold for you?
We are about to start a new school year of actor training at the academy. We are working hard to get Santa's Boot Camp "out there," and we are preparing for, perhaps, a new creative project to work on.