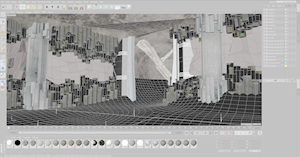 Tell us about your background as a 3D motion graphics artist and why you decided to step into the world of VR content creation.
I worked in London and came to Toronto five years ago as I was attracted to the strong creative community here. In the last seven years I’ve collaborated with brands such as TED, Apple, Starbucks, Sky, McDonalds; agencies including DDB, Blast Radius, Brothers and Sisters; and studios like NEON, IAMSTATIC, Jam3, and Tendril. While I’ve enjoyed working with clients, I created Apiary to focus on building our own intellectual property and tell stories on our own terms. There's a lot of movement and opportunity for 3D artists and motion designers in the VR landscape right now and we are excited to play in this market.
When most people think of VR content, they tend to think of it as either a 360-degree live action piece or a game. ANTUM does not fit into that classification. Why?
ANTUM is a collaborative project best described as an immersive, open-ended interactive VR soundscape that encourages viewers to explore dark and mysterious spaces. VR is an entirely new medium, the rules and conventions are still being discovered. There's a section in the Oculus store dedicated to similar VR experiences that are not games or 360 experiences.
How did ANTUM come about and how does the VR content creation process differ from the more traditional 3D commercial motion graphics work you are best known for? What’s been most surprising?
Nixson Sysanga, the interaction designer on ANTUM, and I have been interested in game design and wanted to tell an interactive story that allows people to explore on their own terms. We started off with a few simple sketches -- big monolithic, open cavern like and dark, old spaces interested us because we could play with light and reveal how space is used in VR. One of the first lessons we discovered about designing for a VR experience were the technological limitations that require you to think more in terms of small intimate spaces versus vast open vistas. We chose to create the experience for the Samsung Gear VR, which is one of the more technically limiting of the VR headsets. This was our first foray into VR, so we decided to keep the scope of the project realistic. Our process in creating for VR differs from motion design in that we are making a non-linear experience using node-based interaction, rather than a directed linear story.
Tell us about the 3D team and the VR production pipeline on ANTUM.
In addition to myself and Nixson, the ANTUM team is comprised of several 3D artists: Jeff Briant, Sonia Bashash, and Gene Magtoto. We’re also working with sound designer Jeff Moberg and C# developer Kowsheek Mahmood. C4D has been my 3D tool of choice since 2010. It blew my mind how quickly I could make cool abstractions come to life. We decided on using the Unity game engine with C4D to create our VR experience as they share similar methodologies and provide an ideal workflow for creating content. We also leveraged the MAXON CV-Smart Export plug-in and others available on its Cineversity training and resource site that are specific for VR that was a huge help in getting started. Other production tools we used included Nitro4D’s Magic Merge plugin for combining complex geometry to make game-ready assets and Simplygon, a polygon reduction tool that’s been paramount in lowering the small polycount allowed for the headset.
Can you walk us through a scene in ANTUM that highlights the 3D workflow?
The concept art in ANTUM was inspired by basalt rock columns and hexagonal rock pillars found in Ireland. The artwork provided to the Cinema 4D artists was specific enough to convey intention, tone and mood yet vague enough to give them room to explore. The obelisks and light pylons, specifically, went through an extensive iteration process. We used the MoGraph Cloner in C4D to quickly build up the column elements and Magic Merge to connect the cloned objects together and remove unseen polygons. Once the scene was built, we grouped sections of the cave together into named nulls, then used CV Smart Export to convert the assets into .fbx files and move them into their respective folder structure within Unity. The plug­in packages the entire scene file automatically into prefabs for Unity exactly as intended, with a great naming system. This exporting process was a huge time saver that allowed us to quickly make changes to 3D models and animations between the two programs and translate what we built to the Samsung Gear VR headset.
You mentioned that the Gear VR headset posed technical limitations. Can you give us an example?
Yes. Our main challenges have been figuring out how to translate what can be made in C4D and redesigning those ideas so that Unity and Gear VR can make it happen. For example, we originally wanted to have motion graphic light projection on the cave walls. This was a challenge not because we couldn’t do it in C4D, but because it simply goes beyond the technical limits of the headset.
What does your crystal ball tell you about the future for motion graphics artists working in VR?
It’s uncharted territory. In some ways, the overall experience of bringing a VR concept piece to the market is so new and processes are still being realized that it feels like we are blindfolded and sprinting into a forest. Motion designers willing to roll up their sleeves and make content, rather than stand on the sidelines will have a direct say into how the language will be created and defined. Working in VR will also give creatives and developers an edge when AR (Augmented Reality) comes to the mass market. I’m really excited for that.