O2 Filmes, one of Brazil's top film studios, handles a variety of tasks across the production process, from pre to post, across feature-length movies, television series, advertising, and even VR. Weekly children's TV show, 'Which Monster Bit You?' which blends live-action segments with 3D animation, matte painting and puppets, trusted ftrack to help get the job done. VFX supervisor at O2’s post-production department, Sandro di Segni explains how they get the job done. 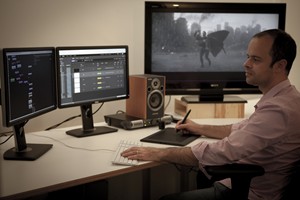 Describe the pre-production process for each of these animations. What sort of planning goes into each episode?
We would look at the script with the directors alongside the children's drawings and discuss the personality of the monsters. We were heavily involved in shooting and planning all the character interactions and green screen shots.
How and why do you craft a completely unique monster for each episode?
Children draw the monsters for each of our episodes, so we did not want to create constraints that would limit their creativity.
A lot of monsters means a lot of organization and deadlines. How did you manage to stay on top of that?
With a lot of planning on the pipeline side. We created a system that worked quite well from modeling to animation and render. It allowed us to finish 2 episodes a week.
How did ftrack play a major role in assisting you?
Ftrack helped us immensely here. We were able to know how much lay ahead of us and balance episodes that were heavy with lighter ones. We were also able to have a snapshot at any given point in time to understand how we were doing considering our deadlines.
What are some other ways ftrack has assisted in the whole process?
The RV review was a big part of the animation approval process. We would do all our internal reviews there and also generate the material to send to the clients.