Bryan McMahan is one of the motion picture industry’s most experienced and accomplished digital colorists with nearly 100 feature films to his credit. His recent efforts include Knight of Cups and Weightless, his third and fourth collaborations with director Terrence Malick and with Academy Award® winning cinematographer Emmanuel Lubezki. He has also worked with such directors as William Friedkin, Sam Mendes, Ridley Scott, John Woo and Walter Hill. 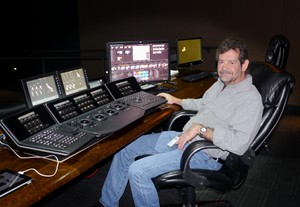 How did you get involved with 'Knight of Cups'?
I’ve worked with Director Terrence Malick and DP Emmanuel Lubezki for a while now. For this film, they came to me and asked me to get involved from the dailies to help get the color right from the beginning. Then, it was a seamless transition to the DI.
What were some of the bigger challenges you faced with color correction in this film?
The film was shot on multiple formats, such as 35mm, 65mm, ARRI, etc., for different looks, so I had to maintain those looks while still pulling everything in and making it all work together as seamlessly as possible. Another challenge included creating a “no look” look, which is what Terrence goes for in all his films. Nothing warm or cool or light or dark; it needs to be as natural as possible without giving a specific look, which is a lot harder than giving something a look. Especially when working with multiple formats.
Any specific techniques you had to experiment with?
I relied on the tried and true techniques and tools for this grade, including clip-based mode, vignetting, Custom Curves and soft clipping to help deliver on the natural look.
Why did you choose to work with Davinci Resolve Studio?
I’ve been using Resolve for the last few years, and it’s fast and gives me versatility and support. As a colorist, you get used to a certain tool, and that's what you learn and become comfortable running. I’m very comfortable with Resolve.
What were some of the best features and how did it enhance the film?
I love how Resolve can handle everything in native formats, which was especially helpful on this film as we used all original formats, and there was no conversion to DPX. I really loved Resolve’s easy way of windowing, which is also helpful for Terrence’s fast way of thinking. Resolve is so fast, which is a necessity when you have the talent in the room with you.
How challenging was it unifying the different camera formats used and how did Davinci Resolve help?
It was actually fairly easy with Resolve thanks to the clip mode. I was able to pull all camera material for one format, flag it and give it an overall look. So for example, I gave all the film footage one marker, all the VFX another marker, and so on, until all the different formats were grouped together. Then Resolve called up each group separately, and I could batch apply the look and give each the correct sizing, if I was using LUT or whatever I was doing to that specific format. Resolve was great for this and made it so easy to get the footage set up before color correction.
What are some of the correction techniques that you had to use?
I used LUTs where necessary and did some desaturation. On scans in P3 or a wider gamut, sometimes the color can get a little electric when you’re not using a LUT to desaturate for you. Otherwise it was about balancing out exposure between interior and exterior shots, as well as between the DP’s exposure changes versus the ones I was making. And Resolve’s Custom Curves allowed me to change the slope on dynamics, which made it easier to adjust the curve of the changes within a shot to match closer to what the camera was doing and the way it was shot.
How was creating a 'natural' look more challenging than creating a 'specific' look?
It’s much easier to do a movie with a specific look to it because you are purposefully making a scene warm, cool or de-saturated, and it’s easier to balance that out and get that same tone.
What are some upcoming projects you are excited to start working on?
I’m working on Terrence’s next picture right now, and it’s very exciting.
Will you be using DaVinci Resolve again?
Yes, absolutely.