Coke's Super Bowl Ad Gets Interactive with the Help of Interlude

Interlude, a media and technology company that enables production and web distribution of selectable, interactive multimedia videos teamed up with Coke for its Super Bowl 50 ad. Using their own platform and creativity, they reimagined Coke's ad and delivered a completely interactive masterpiece featuring The Hulk and Ant Man. 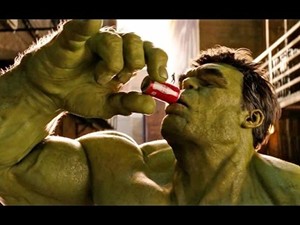 How did you and Coca Cola collaboratively come up with the idea to reimagine their Super Bowl ad?
We took the Coke ad and re-imagined the story using our platform and a little creativity. Coke has been a strong supporter of Interlude for some time, and when we introduced the concept for this interactive ad, they were really excited. Teams across several disciplines collaborated to make it happen, including filmmakers, animators, producers, and developers.
Why was it so important to make the ad interactive?
We’ve seen with our past releases that viewers of interactive video tend to form deeper bonds with a story and feel more invested in the outcome. Our technology brings video in line with other forms of digital media that have long embraced personalization. All you hear these days is that traditional video companies are focused on providing a “lean back” experience, but at Interlude we encourage viewers to “lean in” instead.
What was involved with the pre-production process? What did you do before recreating the ad?
The concept of the interactive ad was to have a character who re-creates the ad at home with his action figures. In order to achieve the "magic" - we needed to make sure each of the frames is identical (or at least equivalent) in its framing, composition, lighting, etc. In order to achieve these, there was a significant amount of work done in order to find the exact locations and build the complete set of props and figures to perfectly recreate the scenes.
What techniques did you use to create these alternate, parallel worlds for viewers to click through?
One of the interesting issues we had to tackle was how to recreate super-hero special effects in a low-fi action figure world. The best example is the moment where the hulk breaks through his office building's windows. In order to create a similar sense of explosion fall-out and debris, the production team conducted multiple real-world props test until finding the perfect setting.
What equipment did you use to make the magic happen?
The core to Interlude’s magic, in addition to the creators who put our resources to good use, are very sophisticated video technology breakthroughs that enable transitions in real time without losing the flow. Also, to conceptualize the interactive, branched video, Interlude’s platform provides a foundation for storyboarding and building the video.
What issues (if any) did you run into during production/post production?
Luckily, since we had a set that consisted mostly of action figures and props - we had a pretty ego-free production. That allowed us to focus on getting the exact shots and delivering a great product on schedule without major issues.
With this ad, what are you trying to relay to those who watch it? And how does the Coca Cola brand fit into that?
The original ad was an action-packed rollercoaster ride and we wanted viewers to feel like they were on that rollercoaster, not just watching it. At the end of the day, we think personal participation and a sense of ownership are pretty satisfying - just like a can of Coke! ;)
What was your favorite part of the ad?
My favorite part is the cereal box explosion, because it shows how into the epic imaginary battle the guy gets, and how much he’s enjoying his DIY stunts. And it looks awesome.
How did it feel to get to work with Coca Cola for a Super Bowl ad?
It was definitely invigorating. Coke is an amazing company that truly sets the bar in terms of brand identity and advertising. We have worked with them for some time, but the opportunity to work on an ad which was seen by over 100 million viewers was pretty wild. We have a great relationship with the team there and hope to continue to grow that relationship in the future.
Are you excited about any upcoming projects? What are they?
Very excited. We just launched the our first interactive series, “TOYS”, which explores some of same themes as our Coke ad. We’ve been having a lot of fun seeing just how weird we can make the “plots” with each new episode. In the first episode, one Ninja Turtles character decides to turn into a fish, immediately regrets it, then proposes to a stranger who asks her for the time. Needless to say, it gets pretty ridiculous.
We’re also launching a couple more interactive series in the coming weeks, one involving eclectic music mash-ups and one Mad Libs inspired animated comedy. You’ll be able to watch all of them on our new site, helloeko.com
Anything else you'd like to add?
We just launched a really cool competition for filmmakers and game designers called “The Challenge of Diversity.” It’s a partnership with Games for Change and the Tribeca Film Festival. Creators have the chance submit an interactive video that discusses the opportunities, difficulties, and complexities of living in the most diverse country on Earth. The winning piece will be showcased at the Tribeca Film Festival and the creator will win $10,000 towards the production costs of a new series. More details can be found on our website, interlude.fm