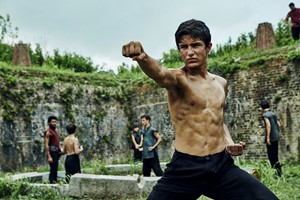 What direction were you given for the look of the show?
George Delaney (GD): Stefan worked with the clients and then did a first pass, but like a lot of television shows, there were things about the look of this world that evolved as they continued to work on it. It's futuristic, but it's also got several kinds of looks. Some of it is naturalistic and some is a bit more intense.

The poppy fields play an important role. Shane Harris (SH): We worked with the cinematographer, producers and AMC giving us notes as the look of the show took shape. There are also a lot of visual effects in the show and as is usually the case, we did some massaging to integrate them into the surrounding shots. The poppy fields are very important, and there are a lot of shots with them and fortress walls, and it was important to give the poppies a consistent feel while being aware of the overall environment so that everything looks real.
You both use DaVinci Resolve Studio to grade the show. How does Resolve help support your workflow?
GD: I've used Resolve for so many years. It really is a workhorse, and each version of the software takes it to a new level. The tools have given us an area to work pre- and post-correction to create a particular feel for the show. There was a scene that we worked on for a while, then the cinematographer wanted it to look later in the day, and boom, I was able to make the necessary adjustments. It's easier than ever before to grab a group of shots in Resolve, change some things and leave others. It's been really helpful.

SH: I'm very happy with my ability to pull keys in Resolve. We went through at one point and wanted to change certain aspects of the look throughout – muting a lot of the greens in the plants in exterior shots and making the red/orange look of one character's hair a bit less pronounced than it read initially – and we were always able to get very clean keys quickly. Same for Power Windows. A lot of the show is set in interiors of old castles and dungeons where it's got to look dark, but you also need to see the characters' faces. So we built a lot of windows in those shots and tracked them in, and Resolve is very good with that.
What do you love most about working on the show?
GD: It's a fun show because there's a lot of action, but it's not all action. The first episode starts with a four-minute fight scene out in the woods and there are all kinds of big action set pieces, but there's a real balance. There are also a lot of thoughtful scenes that give you plenty of time to get in touch with the characters and their stories.

SH: They created an entirely new world with this show, and it continued to evolve as the season went on, so there was a lot of room to be creative and offer input.