The highly anticipated Sundance film “Operation Avalanche," shot by award winning director Matthew Johnson and DPs Jared Raab and Andrew Appelle, was shot using the Pocket Cinema Cameras, along with a unique film conversion workflow to capture the look and feel of an underground 1960s documentary. To capture Johnson and the DPs’ vision, the film had to be shot with the look of 1960s film stock and had to look like most of the footage was shot covertly. Raab and Appelle explain how they got the job done in our exclusive interview. 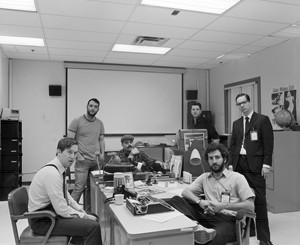 Describe your thought process for 'Operation Avalanche' and why you went with a '60s documentary feel.
Jared Raab (DP) - One of the greatest challenges of the film is getting the audience to suspend their disbelief and buy in to what is essentially a rewriting of real history. Many things were working against us on the production end, from budget constraints to the fact that we like to shoot in real environments with real people. Nailing the authentic look and feel of 1960s verite documentary was something we knew we could control. If we got that right, much else would be forgiven.

Andrew Appelle (DP) - Yeah, shooting a film like this in a conventional cinematic format would have made the subject matter much harder to swallow. If we're trying to tell the audience that man didn't make it to the moon  it's much easier to do so if we say the cameras (and cameramen) are right there along for the ride, documenting the entire process. Also the incredibly improvisational scene work doesn't really allow for a "controlled" shooting environment which means that the documentary style just really ends up complimenting the run and gun mentality of the set.
What goes into the pre-production planning of a period piece like this? How do you prepare?
J - We did dozens of tests. At first with entirely digital work flows, then eventually with the mixed film and digital workflow we landed on. A - Our colourist, Conor Fisher was absolutely instrumental in creating the final look of the film. Conor, Jared and I tested the entire process with a few different cameras and a bunch of different film stocks nearly 6 months before principal photography. Our biggest fear was to be inauthentic and those initial tests gave us the confidence we needed as we moved into production.
Is the filming process longer for these types of films? Why or why not?
A - Much Longer. We over-shoot from time to time....all my love and apologies to editor Curt Lobb.

J - In total I think there were over 100 shooting days. We pulled this off by keeping the crew extremely small and using as many real life locations as possible. For a period piece, I'm sure you can imagine what a challenge that was.
How did Blackmagic Design's Pocket Cinema Cameras come into play?
J - We used the Pocket Cinema Camera every time we didn't want to be noticed, or needed something that would allow us to film discreetly in public.

A - Right, on our first trip to NASA we were terrified of being "made" so we needed something that was compact, looked like a still camera, had a super16 sensor and the ability to wear some old vintage Bolex lenses.
What process do you go through to choose the right camera / equipment?
J - Everything was extensively tested. We wanted the camera support to feel like documentary rigs from the 60s. Something that could sit on the shoulder and be operated in the same way as an old 16mm Eclair. That was really important to us, psychologically speaking. The fact that Andy grew a glorious mustache also really helped in that regard.

A - On that note, because the cameramen were actually characters in the movie, we needed to be very comfortable with our gear. By the time we were on set, we needed to be able to forget about the gear and focus on the story.
What were some of the best features / reasons you chose the Pocket Cinema Camera?
A - Quite simply we needed something discreet with film-like latitude, that could take vintage lenses.

J - Being able to shoot Pro-Res in camera was handy too.
Any negatives / things you wish you could improve a little?
J - I'd love if the next generation of Pocket Cinema Cameras had improved low-light performance. We also created our own external battery pack for extended battery life by rewiring cables. A few adapters accessories for that purpose would be very handy.

A - Agreed. Battery life, focus magnification and a jog-wheel for aperture control.
On your previous film 'The Dirties' you actually had the experience of filming discreetly. Did that make it easier to do the same thing this time? Did Pocket Cinema Cameras help with that?
J - Like we mentioned above, that's one of the Pocket Cinema Camera's best features. It's beautiful. Most people thought we were shooting stills.
What was your favorite scene to shoot?
J - I'm sure Andy will say the car chase. Andy?

J - One good Pocket Cinema Camera story is when we showed up for a location scout of Shepperton Studios. It's the same studio where Kubrick shot “2001.” We had Matt and the other actor arrive in costume, and brought the Pocket Cinema Cam. Our tour guide wasn't there to meet us so we took a self-guided tour and secretly shot the scenes we needed.
Anything else you'd like to add?
J - I just want to recommend that Andy re-grow the mustache. Just putting it out there, that I think it really improved his shooting. Andy?