Inside Canon's 4K Edit Bay at Sundance with Jon Carr

Director, Editor and Colorist, Jon Carr led a glimpse into the EOS C300 Mark II's post-production workflow at Sundance, where visitors could witness Carr's tricks for ingesting, editing, and coloring 4K footage in Adobe Premiere Pro CC at The Canon Creative Studio. Carr provides an exclusive look inside The Canon Creative Studio (4K edit bay), the interactive experience attendees were able to have and the impact of 4K in the production world today. 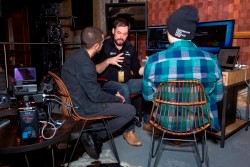 Describe Canon's 4K edit bay and what attendees could expect on-site?
The Canon Creative Studio is a really cool experience where visitors can get their hands on all of the great cameras and lenses that Canon has on the market. One of the the big pushes that Canon is making is with 4K. The new C300 Mark II shoots 4K internally to CFast 2.0 cards. The goal of having an edit bay within the Canon Creative Studio is to get people comfortable with working with these large files. The C300 Mark II also has a new log curve called Canon Log 2. This log curves requires post know how and we go over color correction techniques using the Lumetri color correction tools in Premiere Pro to get the most out of your imagery. The goal is a one on one experience where we can really go over whatever people would like to know in terms of post workflow to develop a comfort level in delivering the best possible imagery.
What does a typical festival day look like at the edit bay?
A typical day consists of sitting in the edit bay with any and all filmmakers and talking to them about the advantages of using both Canon and Adobe. I am a believer in both as I have used Premiere Pro for several years and recently purchased a C300 Mark II. I think this is a versatile combination and you could shoot and deliver anything from a pristine 4K feature film all the way down to the most down and dirty low budget documentary.
How is 4K enhancing film and editing? Is it more challenging to edit in 4K?
4K is happening. All new Netflix and Amazon shows are required to deliver in 4K. It will take time for everyone else to catch up but if you want to future proof your content, it is important to get comfortable with a 4K world. It certainly is more challenging managing all of the data and having a powerful computer with fast raid drives help. The beauty of the C300 Mark II is that you can generate in camera proxy files at 1080 or 2K with a small file size and you don’t need as powerful of a system for start editing these proxies. Once you have finalized your edit you can relink to the original 4K files for your color grade. This workflow makes dealing with 4K more manageable and you spend zero time transcoding footage.
Breakdown of the gear in the bay? Favorite equipment?
We were running Premiere Pro on a HP Z840 workstation with Dual Xeon 8-core CPU, 128GB of RAM, and an NVIDIA Quadro M5000 graphics card driving dual HP Z27 4K displays and two Canon DPV-3010 4K reference monitors. I really loved those dual 30 inch Canon 4K monitors. They make such a huge difference when grading images.
Is this something pre-existing at Sundance or is this something you had to set up for Sundance?
This is really a collaboration between Canon and Adobe to help support filmmakers. They coordinated the details and reached out to me. I was happy to attend. It has been a lot of fun digging in to the features of the C300 Mark II and Adobe Premiere Pro CC with a wide variety of filmmakers.
How interactive is the edit bay? What can attendees do to participate?
It is completely interactive. This isn’t a structured presentation. I have a short documentary called RyWire that I directed and edited in late 2015 that was shot in 4K with a C300 Mark II and a XC10. We have the film in a 4K timeline within Premiere Pro CC and I will walk people how best to handle the 4K workflow. We talk ingesting all the way through color grading. I discuss whatever questions people may have like the advantages of switching to Premiere Pro from other editing applications all the way to getting beautiful images using the Lumetri color correction tools within Premiere Pro CC. The hope is to simplify the post process and get people a little more comfortable with working in 4K and get the most out of their footage.
What has been your favorite part of Sundance so far?
Being at Sundance and talking to other filmmakers is inspiring. I have also enjoyed sitting down and talking to filmmakers one on one about post production. The technology is changing so quickly and it can be tough to keep up. It’s great to take what can be very technical concepts and simplify them to help filmmakers utilize the tools to their advantage to make better films.
Anything else you'd like to add?
This was my first Sundance and the experience has been incredible. There are so many resources and networking opportunities available, I can’t recommend it enough if you are a filmmaker. Just seeing the caliber of films that are being created by independent filmmakers makes me want to step up my game when going into my next production.