DP, Cliff Charles selected six VariCam 35 4K camera/recorders for the live shoot of Amy Schumer' s HBO comedy special, which begins airing on October 17, at the Apollo Theater in New York. He discusses why he chose the VariCam 35 and what he thinks the future of 4K looks like. 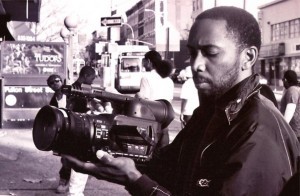 Why did you decide to go with the VariCam 35 4K cameras/recorders for Amy's comedy special?
“When I demoed the VariCam 35 at AbelCine, I immediately gravitated to the 12-bit 4:4:4 color space. The dual native 800/5000 ISOs were intriguing, and I really liked the option of capturing our 4K master and 1080 proxy files simultaneously in camera. The camera’s selectable LUT capabilities afford a lot of flexibility in sending out different looks. Our DIT only provided minimum correction to achieve a pleasing LUT.”
What approach did you take to ensure that Amy's HBO special looked different than her other performances?
Director, Chris Rock wanted this show to have a big concert feel and so we framed our shots to include the large crowd in attendance. The classic and ornate architecture of the Apollo theater also played a big part to the look of the show.
In your opinion, what makes 4K cameras so effective?
The increase in resolution allows for greater flexibility in manipulating the image and so it's great for special effects, big screen projection as well as for punching in and re framing a shot (when necessary).
How important is 4K? What does its future look like?
4K is here right now and the demand to deliver finished projects in 4K is steadily growing. The industry will continue to improve upon the technology that supports acquiring, editing and exhibiting in 4K.
Are you planning to use 4K technology in any upcoming projects? If so, which ones?
Yes, more multi-camera comedy/concert specials as well as scripted productions. Up next is a Netflix special for comedian Hannibal Burress which will also be shot in 4k on the Varicam.
Anything else you'd like to add?
Haven't played with the 5000 ISO yet, but definitely looking forward to trying it out.