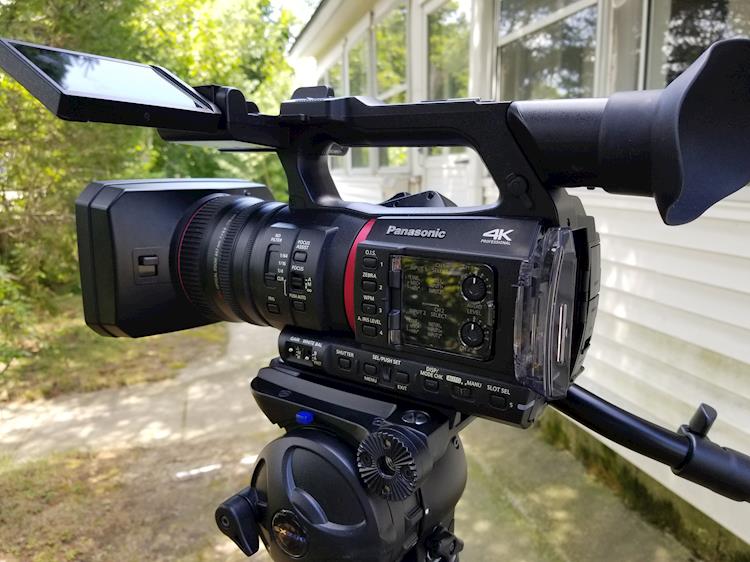 As the Technology Editor for ProductionHUB, my job is to review production tools used by media professionals like you. Normally, I only get to review these products one at a time. But recently, I had the great opportunity to test two products at the same time. The new Panasonic AG-CX350 4K Camera along with the new SHOTOKU SX 200 tripod. I thought it would be an excellent test since freelancers like you and me often work with gear that we might not always be that familiar with, but still need to get the job done.

The Panasonic AG-CX350 has winner written all over it. From the numerous features/benefits to ergonomics, this camera has few if any drawbacks. Yes, I know that some of you will complain about the camera having a fixed lens. In my opinion, the feature set(s) far outweighed that one perceived drawback.

The form and functionality of the AG CX-350 are outstanding. Look at this first image of the camera and how I am holding it. BIG, easy controls that are easy to find and easy to use. Here are the controls on this side of the camera I found most useful.

Other controls on this side were the toggle switches for A/B/Preset White Balance and GAIN. These are two toggles must be easy to get to. On another note, I have never been a big fan of putting the audio controls behind a clear plastic door on the side of the camera. I think the door often just gets in the way or gets broken.

As for the other slots and connectors like the SDI Out and the Time Code In/Out? I am all for keeping those connect points covered up till you need them. I also love that the two XLRs are smartly placed. If you're using a shotgun mic a short pigtail gets you right to the Channel 1 input. Having Audio 2 trail behind you on the back of the camera will keep that annoying mic cable out of the way. Who does not like having “real” full-size XLRs, don't you? But why not caps for those exposed connectors?

As with any new camera shooting protocol, it might be wise to do several test drives before going out on a paid shoot. Did I mention you can also stream with the AG CX-350 as an option? As I said, several practice shoots would be to get a better understanding of what the AG CX-350. 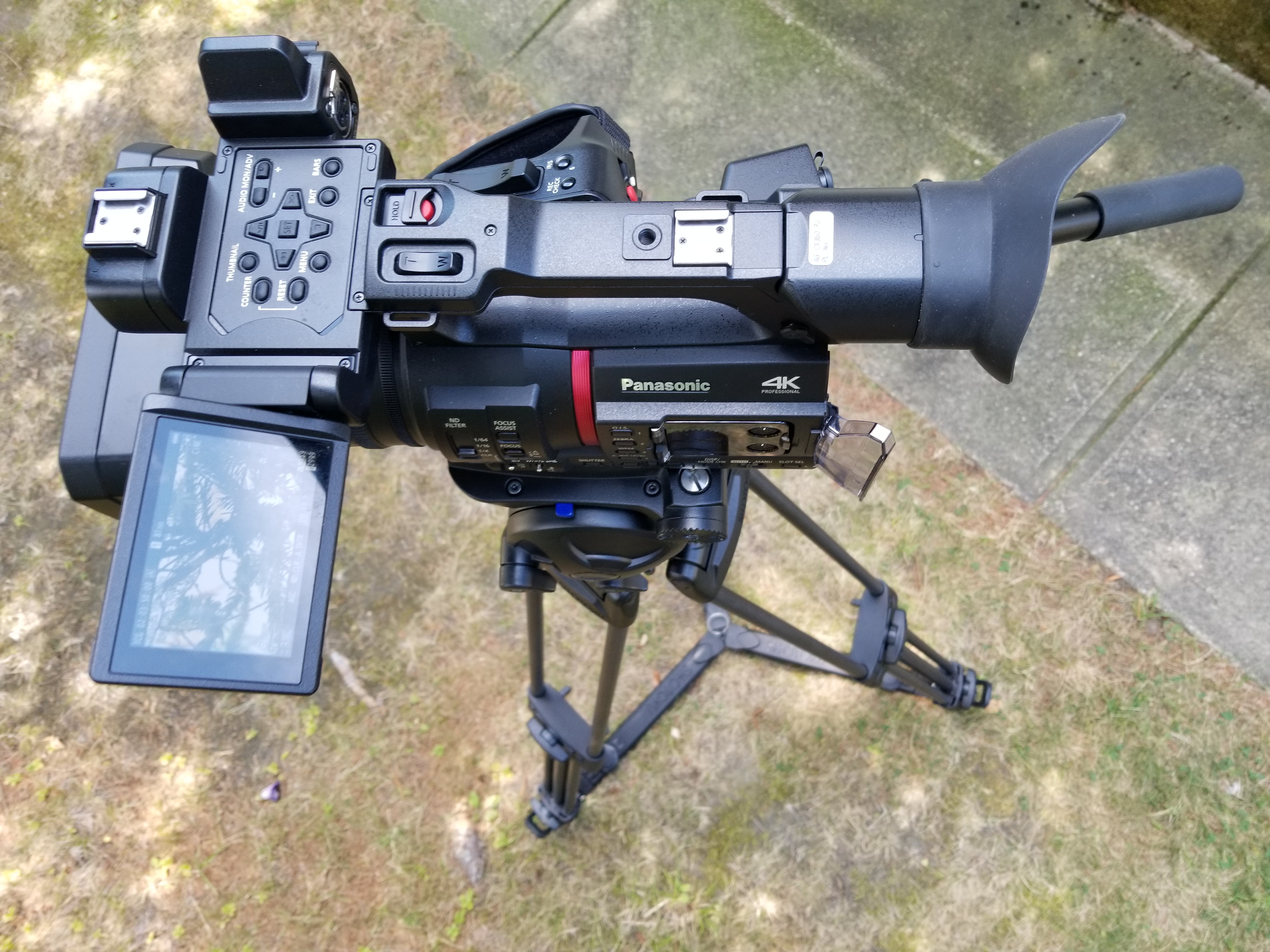 Have you ever been on one of those all-day shoots that just won't end? Of course, you have. We all have. Why am I asking? Because the AG-CX350 might be one of the most comfortable handheld cameras I've shot with in quite a while. I am talking long days.

Important controls are intuitively designed and easy to reach. I thought  the trigger t was a little funky at first, but then I got used to it and understood why it's positioned that way. The zoom controls were also super easy to use. Finally, the lens with the big barrel was very smooth and the gearing was spot on. The built-in lens cap was a nice touch too. Be honest, how many lens caps have you lost in your lifetime? A little touch yes, but nicely done.

The viewfinder optics on this camera were outstanding, as was the view screen. I was pleasantly surprised with the visual clarity of both. Even in the very bright sunshine, images were clear and focus wasn’t an issue. All of the prerequisite information was presented in a clear, easy to read way. When you opened the pop-up screen there was a tactile control panel integrated into the top handle of the camera. Really smart design engineering makes this a great feature. Let’s take a look at some of the specs that make the AG-CX 350 such a strong contender in this category.

Many of you might know the name SHOTOKU from their outstanding array of automated robotic camera support systems designed for larger broadcast studios. With the SX-200, SHOTOKU decided to branch out and the results are outstanding. The SX-200 was very solid, withstanding some gusty coastal winds and long days out in production. Honestly, I think a lot of times people forget that a great tripod is such an important production tool. 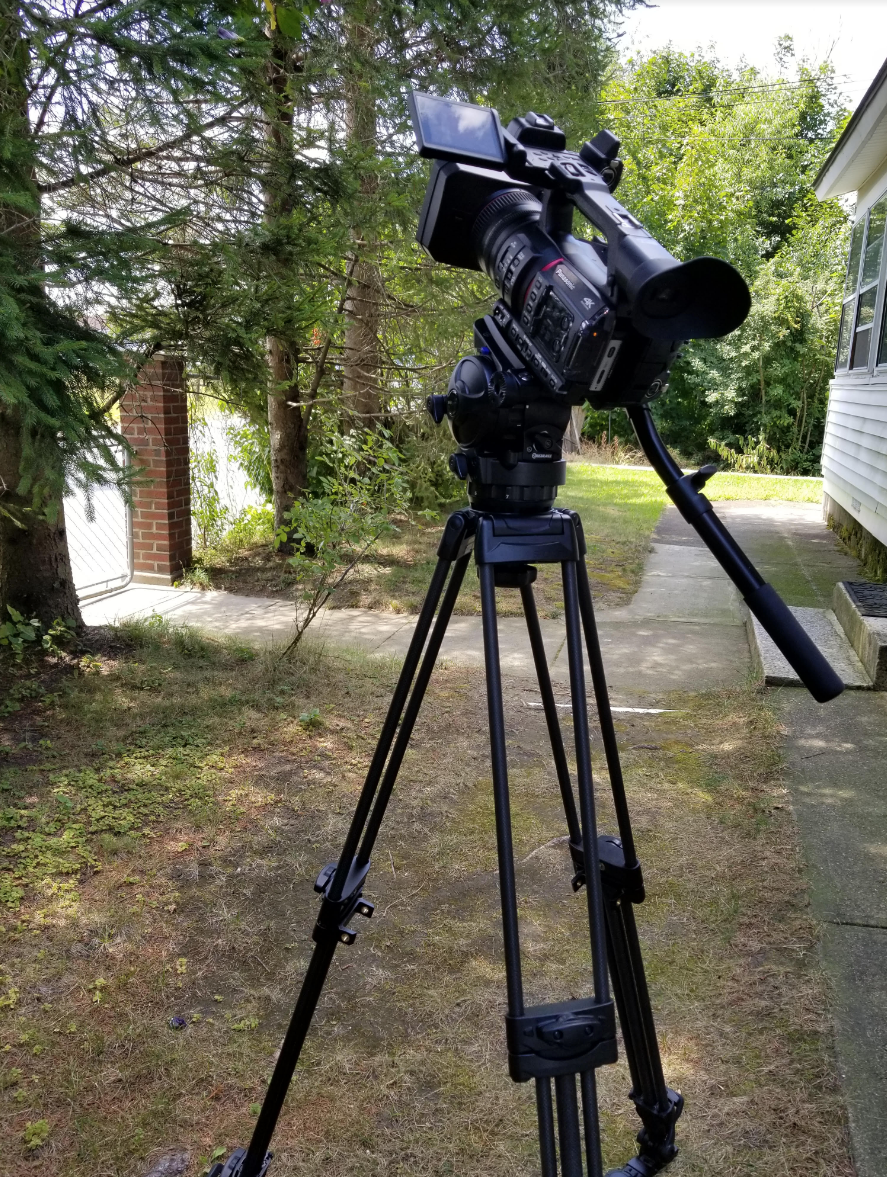 Out of the box, I knew this was going to be a good review experience. The SX-200 came right out of the supplied travel case ready to go. I threw on the spreader and the handle and we were good to go. I liked the fiber carbon legs with the two-tier staging. I put a lot of weight stress just to see if there would be any residual twist on quick pans or tilts. I am happy to report that there was none to be had. I tested the SX-200 with the Panasonic AG-CX350, a Canon C100 and a Blackmagic Design Pocket 4K Cinema Camera. The AG-CX 350 and the C100 worked out fine but the Blackmagic Pocket Cinema by itself was just too light to take advantage of the SX-200.

There were also a lot of locations on the legs to place additional items or tuck cabling to keep it out of the way. If you have been on a shoot lately, you know how handy these features can be with so many additional cables and clutter in the way. So as stated, the legs of the SX-200 were great. Let's move onto the head.

The head of the SX-200 was solid in design and operation. As a camera operator, I could appreciate several features. The head was smooth and with the ability to adjust the pan and tilt with the numbered wheels, I could notate where the setting was so I could come back to it later if need be. The claw/ball made leveling the head a snap. The traditional slide on the plate was as expected, and I liked how the smart addition of an extra screw for the plate was on the head. A small feature, but a good one none the less. Lastly, the weight ratio with the AG- CX 350 felt comfortable as I was good with operating the camera with the SX-200 to achieve the desired results.

These two products worked so well together. The AG-CX350 was a breeze to shoot and operate and when I combined it with the SHOTOKU SX-200, I felt like I could have shot on the move all day long. I know that it was chance that brought them together, but it ended up being a very strong showing for both products both separately and together.

In my opinion, you can't go wrong with either the Panasonic AG-CX350 4K Professional Camera, the SHOTOKU SX 200 Tripod or both. Together, these two make for a strong combination. The AG-CX350 with its many features, will be a great choice for videographers that have a wide range of shooting needs both in broadcast and in other production spaces. The SHOTOKU SX-200can handle a wide range of cameras and would be a great addition to existing production packages.