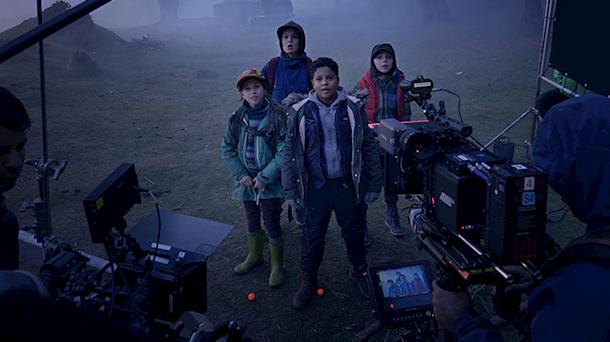 Dedicated to the design of compelling art and technology, Luma Pictures is an Academy Award-nominated creative studio. Formed by a group of artists with divergent interests, but an equal passion for creating standout work, Luma are involved in feature films, and new media. The company’s vast credit list that includes Blockbuster releases such as Dr. Strange, Deadpool, and Prometheus.

Luma is so dedicated to creative development that, in 2015, they set up Luma Launch: an independent multi-million dollar fund to accelerate and incubate notable start-ups across the media world.

“We want to be a great destination for the artists and talent by providing a streamlined workplace with great company culture and exciting, world class projects. Our projects in the past year were the biggest we’ve ever achieved and it’s showing up in awards season,” says Nathan Rush, Luma’s Pipeline Technical Director.

“The main challenge of this project was to bring the Iron Giant to life in a live but operate on a commercial timeline,” Nathan elaborates. “Commercials can have notoriously short production schedules when compared to feature films, but the bar of quality cannot be lowered. We had to ensure that every hour of every day was spent to its fullest to deliver a quality product.”

Keeping pace with the breakneck speed of this production would have been all but impossible without production tracking tool. After all, every aspect of the Final Fantasy spot was interconnected.

“Each day we’d see the updated Iron Giant asset progress and could quickly track where he needed to go next,” says Rush. “ allowed us to quickly see what shots and when, and would also help flag us when things would with very little hands-on maintenance of the system.”

Luma relied on automated tools to track granular organization, allowing the crew to stay focused on what really mattered—artistic quality.

Vetted & Valued
Luma first investigated ftrack in 2014, when the team decided to switch off of their internal project tracking system. After vetting several solutions, ftrack became the clear frontrunner to integrate into Luma’s pipeline.

“We're constantly running multiple, complex projects and our artists work on every single one of them, rather than segmenting. That's why it's imperative for us to handle our wide variety of project-specific tracking needs in a single, unified system” states Nathan.

ftrack allowed Luma to adopt a nimble, modular and robust tracking process. It successfully kept artists structured, without getting in the way of any chaotic—but necessary—shifts in production.

No Man Left Behind
Luma is very much about artists first; open communication between the team is encouraged, no matter where you may be in the company hierarchy. In fact, many of Luma’s best ideas and most innovative designs come from the ground up.

The problem is, in any organization, too many shifts in responsibility between employees can lead to details falling through the cracks.

“We’ve incorporated ftrack in a way where these little conversations are intelligently and gracefully logged into a unified system,” says Rush. “Our team can easily track where a shot currently is in the pipeline, while still having the project management tools to dig through a shot’s history, or even evaluate the upcoming workload ahead.”

Countless Opportunities for Customization
One of most infamous assets amongst users is its readiness for customization, as Nathan explains:

“Pipeline wise, it’s a bit of a beast, as we can tap into Maya, Houdini, Nuke, and ZBrush, as well as Deadline for render management. We plug all of these into ftrack in some form to help keep the different pieces of our pipe organized.”

In particular, Luma depends heavily on the customized shot board. Backed by ftrack’s database structure, the shot board displays upcoming delivery dates in an easy-to-digest thumbnail view, whilst neatly hides the large depth of data it represents.

“I think every producer cringes a little when they see multiple hundreds of shots listed in a massive excel,” says Nathan. “ftrack became a very graceful way to quickly manipulate and view that data on a human level.”

Luma has also recently implemented version dependency tracking tools, using ftrack’s ‘link’ system. This means artists can quickly view every single asset, no matter how minor, no matter its location, without having to crack open Maya or Nuke to do some digging.

The Important Things in Life… and VFX
Reliable software is extremely important to Luma. Artists shouldn't have to spend their time organizing and searching through files when they could be creating assets. Likewise, when held to a tight deadline, it’s important to have an infallible infrastructure in place. With ftrack—reliability is paramount.

“The future looks bright!” confirms Nathan. “We’re actively pursuing new types of work, while constantly updating our core pipeline. With our launch of our animated branch, we’re also taking on new types of projects. We look forward to tackling those new challenges with by our side.”

ftrack is a unique, cloud-based platform that's simple and accessible for users at every stage in the creative process. It lets users set up projects, allocate tasks, track their work in progress, review videos, make notes together and much more - all in a simple, collaborative workspace.