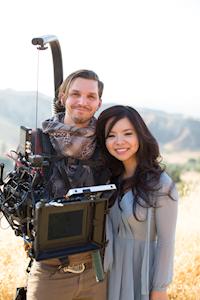 Q How did you get involved with "Witness Project: The Story of Anastasia Lin"?

A The director / editor of the project, Adam Hawk-Jensen, asked me to come on board as his director of photography. As I understand it, the nonprofit organization “Victims of Communism,” approached him to helm a new series of documentaries that would tell the stories of these survivors. I knew going into the project that Adam needed me to bring a strong vision with a lot of creative autonomy on my end as his DP - he’s a great collaborator in that regard. I’ve worked a lot as a cinematographer on projects that explore themes of liberty and what it takes to sustain a free and prosperous society, as well as the inverse. While I have only shot three videos for the Witness Project, it’s been an absolute honor to capture the story of these heroic and inspiring individuals.

Q What tone did you aim to establish and how did you establish it?

A As a cinematographer I’ve found more success in embracing the discovery process that is inherent with documentary filmmaking – the truth, or a person’s story isn’t scripted and sometimes you simply have to keep shooting until you discover that. A lot of thought and collaboration went into where we ought to film the B roll footage for this project with Anastasia Lin. During our location scouting we ended up building the look around four primary visual spaces that would give me the kind of textures, and tonal shifts I wanted to capture her in. They included a natural open-air space, a more urban environment, then we had the interior space built on the soundstage, and finally the archive footage. I felt a lot of responsibility to ensure that I didn’t go overboard in creating a look that was too over-the-top or stylized. I also knew that the director liked to do longer interview sessions that sometimes last longer than 2 hours, so I knew it would be best to shoot the interviews on a soundstage. This enabled me to have a lot of control in crafting a naturally beautiful aesthetic into Anastasia’s interview that would also keep the lighting consistent for as long as we needed. A big part of my process is looking at reference images and working to clarify what my artistic intention is before we begin filming so that I spend as little time as possible lighting the set during production. It was important to have an interview setup that felt natural and free of distracting elements, but I also didn’t want to miss the opportunity to create a sense of depth and beauty in the frame. My gaffer for this project, Michael Phillips, did a wonderful job helping me think through the lighting plan and achieve my vision for our soundstage days. I felt a lot of inspiration and creative intention behind how to approach each of the different aesthetics and spaces. In our early planning stages I found myself really drawn towards shooting two main visual storytelling elements in particular: Filming a small reenactment moment of Anastasia Lin practicing Chinese calligraphy as a young child, as well as shooting additional calligraphy insert shots after principal photography wrapped. Both of these elements are very striking and quite powerful as a storytelling device; the metaphor and iconography of are so apparent in the frame. We scouted for two days, and filmed with Anastasia for two and a half days across three main locations.

Q Describe what you want people to take away from the film.

A Anastasia Lin’s truth, as I see it, comes from a very passionate soul that wasn’t a survivor of something, but instead has forged herself into a champion of preserving human dignity and freedom. Documentary filmmaking can be such a difficult, unwieldy platform that is best-served when you never veer away from the truth of a thing. I simply wanted to give her story the strongest visual aesthetic to share this message, and as a cinematographer it was an absolute thrill and honor to do so.

Q What challenges were associated with shooting? Did you have a hard time landing any shots?

A My favorite filming location was on a remote hill that had these beautiful rolling hills of golden wheat. It was quite a logistical challenge to work effectively in the space, and I had a lot of concerns while we were location scouting about making it work. However our skillful producer J.P. Mandarino was instrumental in putting together a plan that made the whole experience a very efficient operation. It was one of those shooting days where the crew had such a good time working in a beautiful location capturing a meaningful story that you could almost feel the disappointment when we called wrap. If only every shooting day was like that! haha! Another moment that stands out to me was towards the end of our first half-day filming together. We ended up shooting past golden hour and deep enough into civil twilight that our overall ambient light levels required me to push the camera to 1600 ISO to get proper exposure. I’ll be honest about the fact that I was nervous about how the grain structure wouldn’t match, however I was pleasantly surprised at how the Blackmagic URSA Mini 4.6K performed. The color rendition and noise pattern of our twilight footage matched up really well with the rest of the project’s look and tone. It’s a nice feeling knowing that you don’t always have compromise the quality of an established look or aesthetic in order to get enough footage in the can at the end of the day. When you work with good crew and the right equipment you can do almost anything.

Q How did you hit the right balance while filming heavy, emotional stuff? What did you do to offset some of that?

A Well, for this entire series I believe the power of these stories comes from the use of juxtaposition. Visually exploring moments of empowerment and moments of vulnerability creates a really wonderful emotional dynamic that helps articulate just how important the ideals of personal freedom and liberty are to the individual journey. I feel like her beauty and her power was something quite easy to capture and that set us up to weave a story that would easily tell the story visually of the moments of contrast and struggle in her life. Y’know, I have to say that as a DP when principal photography wraps on a project like this the post-production process is something akin to a black box: we’ve poured our heart and souls into capturing as honest, authentic, and beautiful-looking footage as we possibly could and then the director fosters it through the editorial process. You never quite sure what’s going to come out of that process, but I felt a great sense of peace in knowing that my crew and I gave everything we possibly could to telling Anastasia’s story with as much honesty, artistry, and visual poetry as we could.

Q What Blackmagic Design equipment did you use and what were the positives/negatives associated with it?

A I decided to shoot on the URSA Mini 4.6K PL mount after looking at test footage and gaining confidence that I would end up with a strong image. Using the URSA Mini also enabled me to spend less on my camera department’s budget and shift more resources towards lighting rentals & additional crew. The fact that we were able to shoot slow motion, and comfortably expose for 800 ISO, and capture in a RAW digital format made it really quite wonderful to shoot with this camera system. In particular I think the skintones look lovely when you slightly over expose for them by 2/3rds of a stop then adjust the camera’s ISO back down in post, a process very similar to working with a traditional film negative. The dynamic range and shadow detail was another advantage in working with this camera system that really helped me achieve a natural aesthetic in our interior scenes. It’s a really fun camera to work with. For this project we used an Easyrig to stabilize the camera during handheld filming, and that lead to a couple issues in getting the camera balanced. It’s much lighter than other camera systems, which is an advantage most of the time, however in this instance not having that extra weight or inertia to act as an additional means of stabilization led to a five or six shots that I feel have just a little too much camera shake to them. I really have to thank my 1st AC Danny Salazar was relentlessly efficient throughout the project in striving to perfect our production camera’s build.

Q What is one thing you would've liked to do differently if you could go back and change something about the film?

A The digital negative that comes out of shooting raw gives the colorist an immense amount of control over the image, which can really leave a DP’s work quite vulnerable to the colorist’s choices. So when the director reached picture lock I was on the east coast filming another project and missed my chance to be involved in the final color grading before it had to be released. I’m quite familiar with Blackmagic Design’s DaVinci Resolve color grading capabilities, and so I see a handful of missed opportunities and nit-picky things that weren’t quite the look or feel I was going for, particularly in the interview shot. However, deadlines are deadlines I suppose and I really strive to keep a sense of humility and gratitude for simply getting the opportunity to tell Anastasia’s story as artfully as I could in the first place. We never stop learning and growing and it’s important to learn these lessons and apply them on future projects.

Q What are some of your upcoming projects?

A A short film I had the honor of working on as the cinematographer and producer called “The Return” is screening at the Hollywood Film Festival this spring. I’m also currently working with the organization Moving Picture Institute to teach a cinematography workshop in Los Angeles this June that will include Jay Holben and Yuri Neyman, ASC in the lineup of our guest lecturers, which I am very excited about.