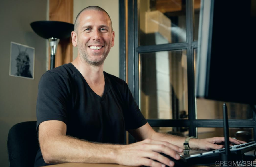 Image Engine's Dave Morley began his career in VFX more than 20 years ago when he started out as a flame compositor in Sydney, Australia. He has worked on projects such as Point Break, Unbroken and the upcoming Power Rangers film.

Q Can you tell us a bit about yourself?

A I’ve been working in VFX for more than 23 years now – I still feel as passionate about it today as the day I started. Unlike when I started, however, I’m very grateful night shift isn’t required anymore! (Except for a few odd occasions!). I’m a lover of photography and try to shoot as much as I can.

A 3d studio and a VHS tape of PIXAR’s Luxo Jr was the catalyst for me to realise that this is what I wanted to do! Before that, I’d always been a big film nerd. I was grounded for a whole summer holidays once when I was still at school (that’s a story I won’t share!) and was confined to the house. I had two months of housebound activities to come up with. Of course being the fool I was, I decided that watching movies was the best way to pass the time. I would sneak to the video store after my parents went to work and rent the five movies in their special deal almost daily. Needless to say, I think I watched everything in that video store in one summer. I wasn’t picky, if it was on the shelf, it end up in my VHS player.

Q Tell us about some of the biggest projects you have worked on in your career?

A Working with Frank Miller on The Spirit was a highlight for me. It was the most creative film I’ve had the chance to be a part of and it gave me the freedom to realise some key environments and sequences. This led to collaborating with Frank on two other occasions in commercials. He’s great to work with – very creative and talented but also trusting of those around him. Unbroken was another highlight for me. Working with VFX Supervisor, Bill George was a great experience. It allowed a lot of creativity and freedom in helping bring the world of the prison camps and the inspirational journey of Louis to life. It’s not often you get to work on films that have a large scope of VFX work that needs to blend into the film and add to the atmosphere and emotion of the story. Lastly, Power Rangers is in full swing now; another great project that is a ton of fun. We’re working closely with VFX Supervisor Sean Andrew Faden on some key aspects of the film. Helping to design worlds and characters never gets tiring to me. It’s hard not to love my job!

Q How did you get involved with the Image Engine team?

A I was looking to find a company that felt familiar to me. I was one of the owners of Fuel VFX in Sydney for more than 10 years. I built a company that everyone who worked there still talks about today. As owners we made sure we were approachable and in the trenches with the team. I wanted that again. I took a while talking to a lot of different companies all over the world. Image Engine for me had that family feel. Everyone was approachable and easy to talk to. I knew from the beginning I would fit in and I wanted to make my new home with them.

Q Which projects have you been most excited to have worked on at Image Engine, and which were the most challenging?

A Power Rangers for sure. I’ve been involved for a while now, putting together a pitch and concepts to help win the job. I love being involved in a project early; it gives me the opportunity to develop relationships and help influence the design and philosophy of a film.

Q What do you think are the biggest challenges in the VFX industry at the moment?

A To create more work in less time, with larger complexity.

Q What inspired you to get into the CG industry and how did you break in?

A It was a combination of my love for movies, computers and photography. But the initial catalyst? Many years ago I was working in a photographic studio printing 35mm film slides for things like PowerPoint presentations. I worked with a huge variety of software packages, as people sent files to us in all different formats. One day a box arrived with some new software from a company I'd never heard of – Pixar. The software was called Typestry, and it was a small program that could be used to create 3D type. Along with the software was a VHS tape marked Luxo Jr. I was curious. I took it home, put it in the machine and BAM – I was hit by a sledgehammer. I was gone, hook line and sinker, and without knowing it at the time, my journey had begun. We had a copy of 3ds Max, so I started modeling and lighting. Admittedly they were really terrible at the time, being as I was teaching myself, but I kept at it. A good friend of mine was a producer at a local VFX/design house in Sydney called Garner MacLennan Design. As it happened, they were looking for a junior 3d artist to join their team. Fortunately, they didn't require formal training as it simply didn't exist at the time. I got the job and haven't looked back since!

Q What is your favorite/most memorable moment in your career?

A There have been so many. I've had the great privilege of working with so many amazingly talented people from all over the globe. However, if I had to share just one wow moment, it would have to be working with Frank Miller. I had worked indirectly with Frank on his film adaptation of The Spirit. Through that, I had the opportunity to work with him again on a Gucci commercial. I flew to Rome from Australia for the filming, and after a good 20 hours of travel I was whisked off to a room in the studio, and it was there that I met Frank in person for the first time. He started to draw storyboards to explain some of his thoughts – I was jet lagged and very tired, so it was a totally surreal moment: he was a hero of mine of sorts, and I'd loved his work for a long time prior to working with him. Sitting there watching Frank Miller put pencil to paper was a really significant moment for me.

Q How has the industry changed since you started?

A I think the biggest change is how accessible it has become for people to get software, run it on their cheapish desktop machine, and start exploring ideas. It feels like you are seeing work every other month these days that totally blows your mind, and it has all been created by individual artists working from home. That wasn&#39;t possible 15 years ago. Today, there are so many more opportunities around the globe for people to gain experience and an education, and so many more studios that require talented artists to create the great content we see on screen every year. It is not uncommon to see a 1,000+ shoot show nowadays. Ten years ago, that would have been unheard of.

Q What's the future of CG?

A Right now, it feels like VR and immersive storytelling are about to become very real. It currently requires very specialized gear to experience, and high frame rates/360 degree vision will add a considerable cost to VFX work. Nevertheless, it&#39;s going to be an interesting sector to watch. With the exponential growth of computers, artists and technicians always find ways to push the envelope of CG. This always leads to more realistic and complex environments, characters and FX, which will drive what is possible in VR. When people consume it even more, VR will open up a huge amount of scope for filmmakers to create worlds and shots that were once impossible to achieve.

Q What are your hobbies and passions outside of work?

A I love travelling and seeing new places. A camera is always by my side and of course my wife, who loves the journey as much as me. Our dog keeps us entertained with exploring the local parks and forests that Vancouver has to offer. Some would also say I’m a little obsessed with coffee and spend way too long perfecting my morning flat white; I think it’s my substitute for morning meditation. I also love to ride my bike when I can, yet I still hope to make it up to Whistler for some summer riding (hopefully this year). Films are my escape, and I often dream of restoring old cars or motorbikes and lying somewhere tropical with my wife.