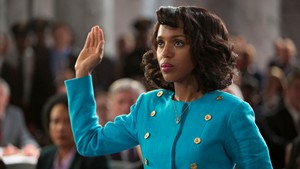 Rachel Morrison is the woman behind the camera of HBO’s Confirmation, starring Kerry Washington as Anita Hill. The film the film explores Hill’s accusations of sexual harassment against then-nominee for the U.S. Supreme Court, Clarence Thomas. In our latest interview, Morrison describes how she developed the "look" for the film, creative freedom, visual references and more.

Q Describe how you got involved with Confirmation.

A I lensed Dope for Rick Famuyiwa. When he signed on to direct Confirmation, he called me right away.

Q What approach did you take to establishing a "look" for the film?

A The early 90’s is an interesting time period because it’s a bit of a carry-over from the 80’s but slightly less distinct. The hairstyles were still pretty epic and shoulder pads were all the rage but at the same time, we didn’t want the film to feel like a caricature, especially when the content is so poignant and still so timely. Ultimately, we decided to go with a slightly muted and desaturated approach in camera, while enabling our costume designer to incorporate some of the vibrant hues that were so trendy at the time. As far as some of our visual motifs, we really wanted to explore the idea of spectacle and what it means to have your privacy invaded and your entire persona under the microscope. To this end we explored the use of negative and positive space, often choosing to short-side or to minimize Anita (Kerry Washington) or Clarence (Wendell Pierce) in the frame. We also juxtaposed spherical lenses with Anamorphic optics that had been cropped in to retain the 16:9 frame.

Q How much creative freedom did you have when it came to making visual decisions?

A Rick always gives me a ton of creative freedom to explore visual ideas and tends to really support and trust my instincts. The only thing that was inhibitive at times was that because this film is predominantly set in office hallways and the Senate Caucus Room, I really had to embrace "the face" as the landscape because there was no place for sweeping vistas at magic hour.

Q Did you use any important visual references?

A The most important visual reference was the real event. We watched countless clips of the hearings on youtube, listened to radio reports, etc. The documentary Anita by Freida Lee Mock was useful, if not as a visual reference than as a character study. We wanted to feel true to the era and catapult our audience back to the time. But we also looked at fight films from Rocky and Raging Bull to the Wrestler and even Black Swan in order to explore the idea of spectacle and spotlight.

Q What type of relationship did you have with the producer and how did this enhance the look and success of the series?

A The best relationships with producers are always collaborative ones. And the best producers will usually say yes before no but they will want you to justify your choices. On Confirmation, they would ask “Why do you need a Condor? Why do you want to shoot anamorphic? Why do you need 100 extras?” In order to answer, it would often clarify my own intentions and in doing so, strengthen them. Without fail, if I could convince the producers I had a creative reason for some tool or lens, then they would do everything they could to get me the tools I needed and to explain and support these choices to the network/studio.

Q Why did you feel it was important to tell this story?

A I think this conversation is as timely as ever. It brings to the forefront just how little has changed in the past 25 years in that both gender and race inequality are still a predominant issue and often they are at a cross section where they are pit against one another instead of working together for change.

Q Were there any particular shots you said, "Yes I completely nailed that!"? What were those shots?

A When Anita arrives in DC for the first time and descends the escalator at Dulles Airport only to be completely enveloped by photographers and press. There needed to be this sense that suddenly her life would never be the same again and while I was operating that shot, enveloped myself, I definitely had the ‘yup, nailed it’ moment.

Q Did you have a favorite shot/sequence from the series?

A My favorite shot(s) is just before Anita enters the press conference where she takes a moment to gather her thoughts and she is minimized on the far edge of frame. It really feels like the weight of the world…

A Just that I really hope we are not still having this same conversation [about gender and race inequality] in another 25 years!!!