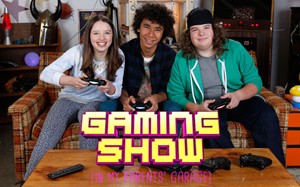 Andrew Kowalchuk, Technical Director of the "Gaming Show" at B-Minors, the kids programming division of Banger Films, discusses why he and his team chose Blackmagic Design SmartView & SmartScope monitors for Family CHRGD's "Gaming Show (In My Parents' Garage)", what things to consider before you choose a monitor and how they produced gaming visual effects for each episode.

Q What makes a good monitor? What factors do you look for when deciding which monitors to use?

A Video professionals know that monitors can can be just about any price, from $100.00 to $30,000. So cost is always a big factor: do you get good value for the money? For me Blackmagic products always deliver in the value department. The Blackmagic Design monitors deliver good picture detail and colour rendition at a price that works for my budget.

Q For filming Family CHRGD's new show, "Gaming Show (In My Parent's Garage)" what was the most important thing your monitors needed to accomplish?

A Flexibility. I needed monitors that can be used anywhere on-set or on location, that aren't heavy or overly complicated. The Blackmagic Design monitors are very simple, no buttons or knobs to stick or lose. I like the fact that they can all be controlled and adjusted through software control.

Q Do the types of camera/video equipment you use have an effect on what monitors you use?

A We are not shooting a high drama. We are not using colour looks and LUTs. The monitors deliver a good realistic picture day in and out.

Q Why were Blackmagic Design’s SmartView and SmartScope monitors the best fit?

A Again, great value. Having a complicated high-end monitor for the director that can display waveform and vector is not necessary in my view. The director gets a straight up monitor and the SmartScope goes in a place that the lighting and camera people can access it. By splitting out the functions I get more flexibility and I can afford to have more monitoring on-set.

Q Was there any outside (of the studio) filming done? How did the monitors accommodate this? Will all monitors or are there key features you should look for if you are filming outside of the studio?

A The simplicity is great for taking stuff on location. I can have a rack of monitors in simple frame or in a case and they weigh very little, really easy to move around. I remember the days of hauling around CRT monitors to sets and locations. I love being able to have a rack of monitors with waverform and vector at my disposal for a fraction of the weight and cost that they used to be.

Q What were some of your favorite scenes from the show? How were they shot? Were they challenging to accomplish?

A It's a kids show so there are lots of fun things about it. In a couple of episodes we brought cars on-set and actually in the garage. The theme was motorsports racing and the DP designed a fun chessy effect with some large consumer TVs. We recorded some game play from front and side views and then I played them back with the Blackmagic HyperDeck Studio recorded. The TVs were placed on the hood and at the drivers side window and it created an fun rear-projection style effect.

Q Why create a show based on gaming? Is there any interactive experience for the audience?

A Kids love gaming. The show also has a Youtube channel with it's own content and they run a Minecraft server where you can play with the stars, if you can figure out who they are.

Q How are gaming visual effects introduced in each episode? How challenging is it to capture both the actors and those effects in one shot?

A Most of the effects are pretty basic, jump cut type stuff. But both sides of scene are not necessarily shot on the same days. We record proxies of everything we shoot through the multi-view output of a Blackmagic ATEM switcher. When we need to reference back to the position of props or wardrobe we playback the proxies to the on-set monitors and each department can see what they need.

Q Will you be using the SmartView and SmartScope monitors for future projects?

A I use the monitors all the time. When the show isn't in production I re-deploy the gear in our post facility or on other productions.