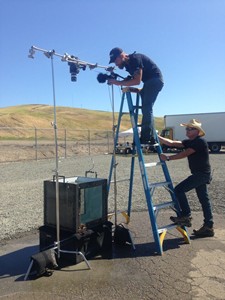 DP Scott Sorensen is using 10 Blackmagic Pocket Cinema Cameras to shoot secondary footage, cold openings and the new opening title sequence on Discovery Channel's hit television show, "MythBusters." He debunks how these cameras helped him get the perfect shot, its best features and what other types of projects the cameras can be used for.

Q How did you determine you would use Blackmagic Pocket Cinema Cameras on MythBusters?

A We adopted the Pocket Cinema Camera at the start of a new season of MythBusters. The show had changed dramatically at the beginning of the tenth season and we wanted to update the look of the show. In San Francisco, we'd been toying around with DSLRs and liked the look achieved with a large sensor. It was our Director of Post Production, Anthony Toy, who first suggested the Pocket cam.

Q What are some of your favorite features of the camera?

A As per its name, one of the defining characteristics of the Pocket camera is its diminutive size. The Pocket packs some big camera features into its fun-sized frame. When setting up cameras for an experiment, our Pocket cams rarely require more substantial rigging than a Magic Arm on a C Stand. That means we can setup quickly and ensures that we're blowing up the greatest quantity of material in a day...For science. We utilize the Pocket's time lapse mode on a daily basis to cover builds and establish locations. I've found the Pocket to pair beautifully with my Kessler CineDrive system. I run the Pocket and CineDrive off the same Bescor BM-Epic battery packs and the Pocket slots into my CineDrive case, making it simple to hike in somewhere and setup a time lapse.

Q How has it been beneficial using it for MythBusters?

A From day one, the Pocket streamlined our media management for our second cameras. Previously, we'd been dubbing our second cameras in real time to XDcam disc. Shooting ProRes on the Pockets has saved us a lot of time in San Francisco as well as in Sydney, Australia, where all the post production is done.Efficiency aside, the Pocket cameras have significantly improved the look of the second camera coverage on the show.

Q What was your favorite thing to film so far with the camera (on MythBusters)?

A I enjoy using the Pocket cams to shoot the openers for the show. Starting in season ten, we open each show with a short vignette that sets up that episode's story. I'll typically shoot with a Pocket with the MetaBones SpeedBooster and our old Nikon F Mount glass. The Pocket camera gives our opening sequences a more cinematic feel that helps them stand apart from the rest of the show. Of all the openers we've shot, my favorite is probably from our Indiana Jones episode way back at the beginning of season ten. It fulfilled a lot of nerdy childhood dreams to film Adam stealing a golden idol from Jamie and being pursued by a giant boulder. There is a shot I love in that sequence where Adam walks toward camera from out of the shadows and we see his face for the first time. It's a cool shot, and it wouldn't have been half as good if I'd filmed it on a 2/3" ENG camera.

Q What other types of projects, in your opinion, would the Blackmagic Pocket Cinema Cameras be useful for?

A Outside of MythBusters, I've used the Pocket to shoot a short narrative and a few music videos. I've found the Pocket to be extremely versatile on indie projects. Because of the camera's size, I can switch between tripod, shoulder rig, slider, and Steadicam quite quickly. It's upsetting to think about what I could've done if I'd had the Pocket Cinema Camera while I was in school. I would've had a lot of fun with a Pocket, a SpeedBooster, and some old Nikon stills glass.

Q Are you planning on using the camera again?

A After MythBusters has detonated its final explosion, I will continue to use the Pocket Cinema Cameras. They're super handy little cameras. I'll definitely keep a few of them in my kit.

A It's worth noting here that we haven't managed to kill a Pocket cam. Yet. The other day, we got close. We were filming an experiment that involved many hundreds of pounds of explosives. One of our cameras was on a magic arm sitting on a dirt berm. It was probably 100 feet away from our test subject and the hundreds of pounds of explosives at the time of detonation. When the shock wave hit the dirt berm our camera was sitting on, it fired all the small rocks sitting on the berm into the camera like a shotgun blast. The Bower 7.5mm MFT lens was completely shattered, but the camera was fine.