Carlo Rinaldi, AIC recreates a horrific event for The Haunting of Sharon Tate with VariCam LTs 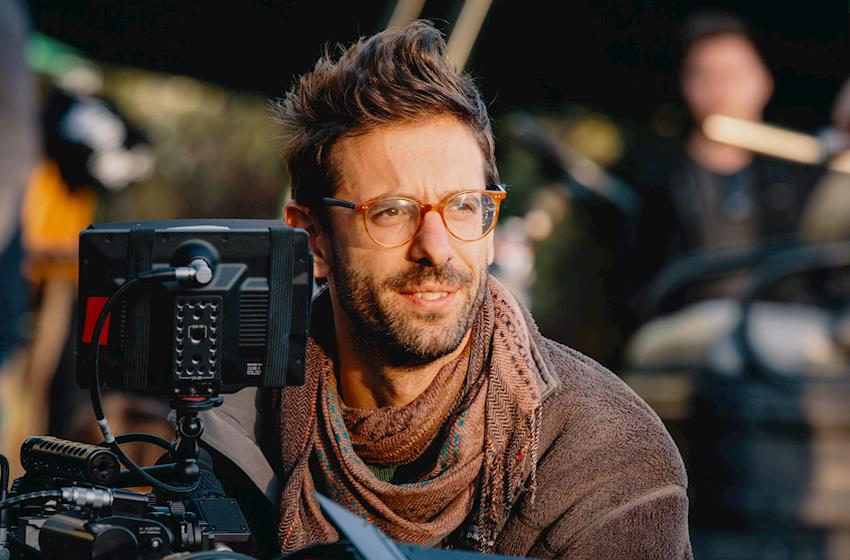 This summer marks the 50th anniversary of one of Los Angeles’ most notorious murder cases. The Haunting of Sharon Tate follows 26-year-old actress Sharon Tate (Hilary Duff), a rising star about to have her first baby with her husband, director Roman Polanski. Fraught by terrifying dreams, Tate’s worst nightmares come to life with the appearance of Charles Manson and his deadly cult. The horror/thriller feature film was directed by Daniel Farrands (Amityville: The Awakening) and shot by cinematographer Carlo Rinaldi, AIC with VariCam LT cinema cameras.

Growing up in Rome, Italy, Rinaldi graduated with a degree in mathematics but was more interested in pursuing a career in the arts. With a background in photography, Rinaldi went on to attend the Centro Sperimentale di Cinematografia, where his mentor was the legendary cinematographer Giuseppe Rotunno, AIC, ASC, who shot classic films for Federico Fellini and Luchino Visconti. After graduating, Rinaldi immediately started working as a camera assistant.

“My English was decent at that time,” says Rinaldi, “so I began working on American productions that were shooting in Italy. My first job was on HBO’s Rome, and through the years I got to work with amazing DPs like Matthew Libatique, ASC, Salvatore Totino, ASC, AIC, Greig Fraser, ASC, ACS, Alik Sakarov, ASC, and Jonathan Freeman, ASC.”

Rinaldi decided to move to Los Angeles in 2008 to become a director of photography, shooting indie features, shorts, commercials and documentaries. His involvement with The Haunting of Sharon Tate came about from shooting his previous film, The Amityville Murders, which he had shot with Farrands only a few months before. “Daniel had this story about Sharon Tate that was very interesting,” says Rinaldi. “Everything is based on an interview Tate did a couple years before the actual murders where she tells a journalist that she was having weird and violent dreams about getting murdered.”

Rinaldi tested VariCam at Panavision Woodland Hills and was impressed with the results. He mainly tested the dual ISO sensitivity and how skin tones looked at higher ISOs. “I started discussing lenses with David Dodson at Panavision Woodland Hills and he offered to let me try an amazing set of Baltars [built by Bausch &amp; Lomb]. Not the Super Baltars but the real Baltars that I think came from the ‘40s. You cannot emulate that look anymore. I tested the lenses and they were really beautiful but because they were old glass, they’re not superfast.”

Farrands and Rinaldi wanted to do something different than The Amityville Murders, which was shot in classic ‘70s horror style with zoom lenses. For The Haunting of Sharon Tate, they wanted to create more of an indie film look, which would include handheld camera and naturalistic lighting. Alejandro G. Iñárritu’s Babel (2006) was an influence for its frantic camera work, as well as Roman Polanski’s Rosemary’s Baby (1968) for its use of contrasty, dark faces and backlit subjects. “We also researched old photos of Sharon Tate from that era,” explains Rinaldi. “but it mainly came down to naturalistic handheld camerawork with the look of ‘60s or ‘70s film stock.”

Because of the location, Rinaldi wanted a lightweight and compact body, so he chose the VariCam LT over the VariCam 35. “I knew I had to operate so that camera body had to be on my shoulders for the entire movie,” he reveals. “I wanted to have something smaller. You can compare the size of the LT to the [ALEXA] Mini or the new REDs. It gives you an advantage.

Having a larger body, especially when you’re shooting on location, is not a good idea.” Rinaldi discussed with the producers on whether to shoot 4K or 2K. Because he was shooting with the LT and there wasn’t a 4K requirement, Rinaldi decided to shoot in 2K in 12-bit 4:4:4 for more versatility in his color grade. “Once we decided to go 2K, I had the option to go ProRes or AVC-Intra,” says Rinaldi. “ProRes is the standard and I initially thought about going ProRes and then I tested the AVC Intra with my DIT and the capture was really good, plus I could capture proxy files on small SD cards. We used the proxy files as our dailies. Because I typically operate, I don’t have time to go to video village and play around with color grading. I’d rather create a few LUTs, get the looks into the camera and then have a data manager rather than a full DIT color grading on set.”

Rinaldi primarily used the V709 LUT and had two different versions with two different levels of saturation. “I use the 709 as a reference for exposure,” explains Rinaldi. “I don’t want to mess up the gamma at all because I want to know exactly where I am. This is only for monitors, which is just to give the producers and the director an idea of the look. Obviously, color grading is a completely different thing.”

In working with the VariCam LT’s dual ISO sensitivity, Rinaldi shot every day scene at native 800 ISO. For night exteriors and interiors, he captured in a range between 1600 and 3200, dialed down from 5000 base. “I tested 5000 at Panavision,” explains Rinaldi, “but the truth is I didn’t need it. Even with a little light, you often need to flag things down. Between 1600 and 3200, you really have no noise at all. We wanted to have a clean capture and add a little texture in the grading session. Also, the house location has a major overlook to downtown Los Angeles, and I wanted to keep those lights as a part of the story. There are some beautiful shots, even in action
sequences, where you see all of these beautiful LA lights in the background.”

For lighting, Rinaldi tried to use natural light as much as possible for exteriors and interiors and as many practicals for interior night scenes. He used a combination of small HMIs, Skypanels, LiteMats and Quasars. “The lighting idea was to have a very small footprint inside the house,” says Rinaldi. “I had a few lights outside through the windows whether it was a punch for the day or a little moonlight for night. The ceiling had wood rafters so I could hang some small lights from above for some top lighting. I also lit people from the ground just taping a Quasar on the floor.”

He also had the challenge of shooting sequences that were described in the script as “in the dark” since members of the Manson family cut the power before entering the house. Rinaldi had to shoot a complicated stunt sequence with six or seven actors performing a violent fight choreography in a dark environment. He also had to have enough light to properly expose a good digital negative. “The actors would walk on to the set and say, ‘Oh my God, this is so dark,’ but the dark environment actually helped with their performance,” says Rinaldi. “They were not walking into a studio where everything is bright, and you have to pretend that a mystery is going on. They were entering a real location in the same kind of house, dressed in period clothes in the dark, and they were performing that terrible moment.

“It also helped me logistically,” continues Rinaldi. “You don’t have many wires or stands lying around, so I had the opportunity to shoot 180-degrees, or sometimes even 360-degrees. That scene required a little more work in post, but we knocked that scene out in a day where bigger movies would have spent a few days, if not a week.”

The Haunting of Sharon Tate was posted and graded by colorist Joel Ides at Anarchy Post in Burbank, CA. According to Rinaldi, since the look was mainly captured in camera, Ides leveled everything for the pre-grade and then applied the V709 LUT. For inspiration, they also looked at Kodak’s 5384 color print stock, which Oliver Stone used to print The Doors (1991). “There was so much natural light and the sun has a different angle in January. The only thing I tried to do was to introduce some colder tones in the shadows. This was an independent movie, so we didn't have a lot of time and there were a lot of different sequences. We spent most of the time making the color look consistent between days, nights, stunts and different exposures.”

Overall Rinaldi was extremely satisfied with the result. “The VariCam made a big difference in using less light and changing my lighting approach. Obviously, the sensor helps me a lot when I was in trouble in terms of shooting complicated sequences with small lights and no stands. My philosophy is you must turn every disadvantage into your advantage and be creative. If you’re creative and you don’t see that as an issue, it might become a signature style.”

Newark, N.J.-based Panasonic Corporation of North America is a leading technology partner and integrator to businesses, government agencies and consumers across the region. The company is the principal North American subsidiary of Osaka, Japan-based Panasonic Corporation and leverages its strengths in immersive entertainment, sustainable energy, integrated supply chains and mobility solutions to enable its business-to-business customers.
Panasonic was highlighted in Forbes Magazine’s Global 2000 ranking as one of the Top Ten Best Regarded Companies for 2017. The ranking is based on outstanding scores for trustworthiness, honesty with the public and superior performance of products and solutions.

Learn more about Panasonic’s ideas and innovations at www.na.panasonic.com/us.