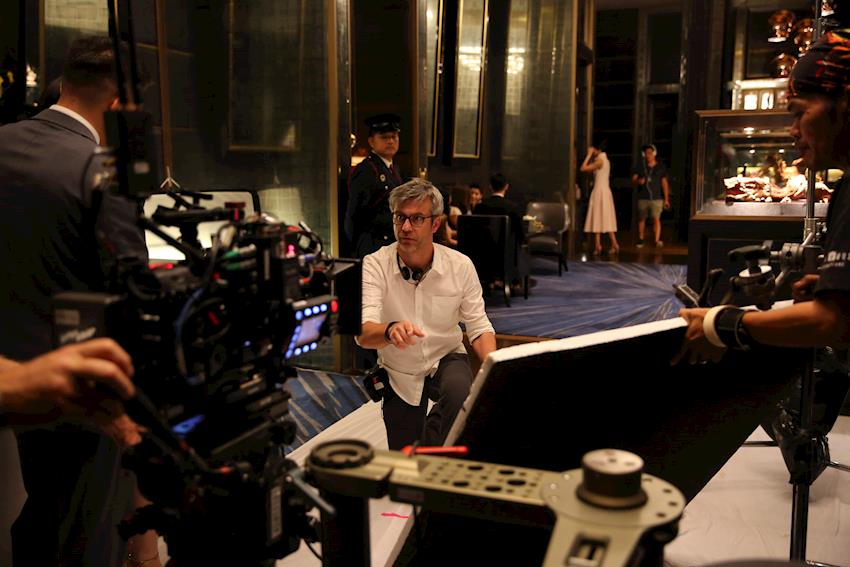 Crazy Rich Asians is a romantic comedy-drama film, which is based on the best-selling novel by Kevin Kwan, and tells the story of an Asian American woman who meets her boyfriend's family, only to find out they are one of the richest families in Singapore. The Warner Bros film was directed by Jon M. Chu (Now You See Me 2, G.I. Joe: Retaliation) and features an all Asian cast, including Constance Wu, Henry Golding, Ken Jeong, Michelle Yeoh, and many others. It is the first Hollywood studio film to feature Asians in leading roles since director Wayne Wang’s 1993 film, The Joy Luck Club.

The film was shot by cinematographer Vanja Černjul, ASC, HFC (The Perfection, The Deuce, Marco Polo) with VariCam Pure cinema cameras. Černjul discovered cinematography at film school at the University of Zagreb, Croatia. After graduation, he became a cameraman for international news outlets like the BBC, CNN, and NBC during the conflict in ex-Yugoslavia. “There was no internet available to us in 1991, so we had to distribute all the footage from the location to the networks via a satellite link, which was very expensive,” explains Černjul. “There was also a great time pressure because it didn’t matter how amazing your footage was if it wasn’t delivered before deadline. That taught me a lot about in-camera editing and shooting under various conditions, always utilizing available light.”

It was Černjul’s experience working in South East Asia where he had shot two seasons of the Netflix series Marco Polo that played a role in getting Crazy Rich Asians. During the Marco Polo shoot, he met producer Tim Coddington who got involved with Crazy Rich Asians right after production wrapped. “I fell in love with that part of the world and was looking forward to going back,” says Černjul. “Tim connected me with director Jon Chu,” explains Černjul, “and I loved Jon’s approach to the story. Jon was very passionate about the project and told me he wanted Crazy Rich Asians to be the most beautiful film he ever made. He is a visual director and I was excited by the challenge. It turned out to be one of those rare experiences that were both pleasant and fun to shoot and turned to be a successful film of cultural importance that exceeded everything we hoped for. It was not easy to make, but the camaraderie and good vibes inside our very international crew made it enjoyable.”

According to Černjul, it was essential to capture and heighten the beauty of the locations. “I knew from my previous experience that the weather in that part of Asia dramatically changes throughout the day, especially during the monsoon season,” he explains. “We ended up with 38 locations in 42 shooting days and we had to move around quickly with a large cast, who had to look their best and were dressed in amazing costumes all the time. You can imagine that the heat, humidity, and daily storms weren’t going to be helpful. Luckily, our production designer extraordinaire, Nelson Coates, found ways to protect us from rain as much as possible.”

Chu collaborated with Černjul, as well as production and costume design, to create a visual portfolio for all the departments with specific guidelines how each part of the story should look and feel. “The color palette for New York had to be contrasted with the tropical megacity of Singapore,” reveals Černjul. “Within Singapore, there were different cultural and socio-economic environments that also needed visual distinction. I am very happy how coordinated we all were despite a very short prep. We looked at a lot of classic Hollywood romantic comedies from the genre’s heyday, specifically because we didn’t want Crazy Rich Asians to look anything like that. We wanted a timeless cinematic look for the film.”

Černjul discovered the VariCam a year before starting on Crazy Rich Asians while working on the HBO series The Deuce, which he shot with VariCam 35s. On The Deuce, Černjul was impressed with the VariCam’s performance on high ISO settings which were going to help him for the series’ low-light shooting style. “After that experience, I knew VariCam was the right tool for the challenges of Crazy Rich Asians because of its versatility and robustness, especially with the Codex VRAW2 recorder for the VariCam Pure,” says Černjul. “The option of capturing the film in 4K VRAW on a sensor I trusted and knew well made this choice a no brainer.”

Černjul captured uncompressed VRAW 4K files in anamorphic that was de-squeezed to 2:39:1 aspect ratio. He worked with his longtime collaborator D.I.T. Matt Selkirk and following advice from colleague Dado Valentic, they decided early in the preproduction to work in the ACES color space. Selkirk created a bulletproof ACES LUT that they used for the entire film. “Matt’s partner from Frame Logic Digital, Nick Kay, had some fresh experience with ACES and VariCam, and his input was very valuable since we had very little time to figure things out,” explains Černjul. “Once we had the LUT, we tested it under different ISO settings and decided that the range between 800 ISO (from 800 Base) and 2500 ISO (from 5000 base) was right for the look we were going for. I felt comfortable mixing different ISO settings from within that range even inside a single scene. It was liberating not being held hostage by light levels from practical sources.”

Working with the Pure’s VRAW flexibility, Černjul wanted to capture widescreen cinematic images and having an anamorphic feel was important. “We didn’t want to crop the image and lose the resolution, which we would have to do if we went with full 2:1 anamorphic lenses,” explains Černjul. “The only choice left was the Hawk 1.3x Anamorphic lenses. Fortunately, I had a lot of experience with those lenses and I was very comfortable working with them.”

The film’s finale was shot in Singapore’s Gardens by the Bay, which according to Černjul, is an amazing landmark and was a privilege to work in. The entire cast was in the scene, as well as hundreds of extras in black tie and heels. Since it was a major tourist destination and pride of the city, the production was only allowed a limited amount of time to shoot at the location. For Černjul, it was important that Chu and the actors had maximum freedom to move around. They also wanted to see as much of the environment and the city behind it, so the light levels had to be low and fine-tuned – both in intensity and color.

“Our great gaffer Julian White and his best boy, Nico Kalimerakis, came up with a great solution,” says Černjul. “They mounted 12 moving lights on the catwalks between the Super Trees (iconic tree-like vertical gardens, measuring between 25 and 50 meters tall) all fully controllable via an interface on Julian’s iPad. The whole scene was shot with a combination of existing light coming from the environment and the pre-rigged moving lights. We would still be shooting that scene if they didn’t come up with this great idea. I never used moving light before, but now they are a standard part of my package.”

The film was graded at Company 3 by colorist Stephen Nakamura. During principal photography Černjul lit the film with the ACES LUT and Selkirk applied CDL corrections to every shot. This made their color grading sessions more efficient and gave Nakamura more time to work on creative color decisions rather than fixing inconsistent looks.

Overall, Černjul was very pleased with the way Crazy Rich Asians turned out. “Besides being an important milestone on the road towards more equal representation in Hollywood, the film was received overwhelmingly positive by both audience and critics so far,” he says. “I am happy I had a chance to be a part of what is being described as not only a film, but a movement.”