Sony’s FS5 Goes to New Heights for Breathing on Everest 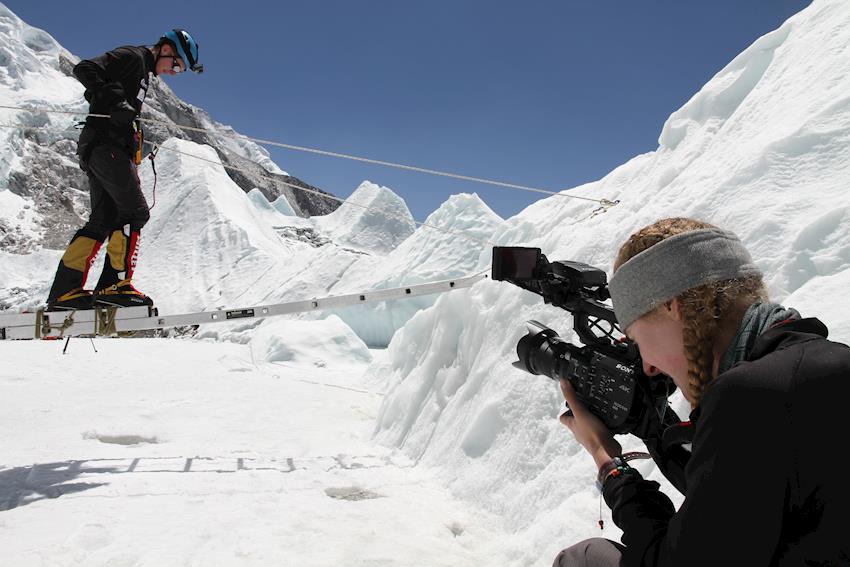 My Breathing on Everest journey kicked off less than a year out of University when my friend and frequent collaborator Meredith Gaito came to me with an idea she knew most other people would call too ambitious or downright crazy. A year and a half later I have been to Nepal twice filming at the base camp of Mount Everest for what has become a deeply personal documentary. 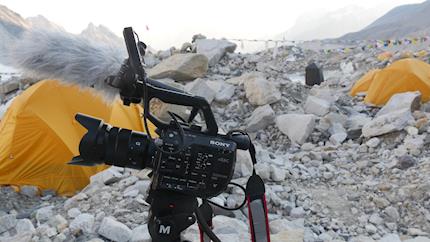 My professional film career started with me PA’ing on sporadic shoots around New York City while attending Montclair State University’s Filmmaking BFA program. I quickly learned that I wanted to be holding the camera. I focused my studies towards Cinematography which opened up opportunities for me to shoot on many of the cameras in the university’s film cage including the Sony FS700 which I used on Meredith’s Senior Thesis Film. At one point during that shoot I attached the FS700 to an EZ-rig and waded thigh deep into a river in the middle of winter and that’s when I knew I’d work with Meredith again.

In 2014, Meredith asked me to shoot and co-produce Breathing on Everest after she had read an article about a man named Nick Talbot with Cystic Fibrosis who was attempting to summit Mount Everest. Cystic Fibrosis is a genetic disease that damages the body’s organs with a surplus production of mucus that is abnormally thick and sticky. It most commonly affects the respiratory system and in many cases leads to the need for a lung transplant or to an early death. Meredith realized the importance of this man’s mission when many other people did not, because she also has Cystic Fibrosis.  Meredith sent the climber, Nick, an email and we’ve been a team ever since. 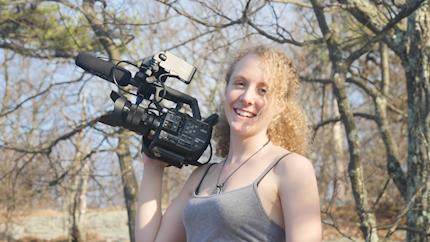 Breathing on Everest, which is being submitted to film festivals this fall and working toward a 2019 premiere, is an extremely low-budget film with the bulk of our budget going towards travel and expedition costs. The kit for my first trip to Nepal in 2015 consisted largely of equipment my one crew member, Michael Pacyna, and I already owned. That trip ended a month early when a 7.8 magnitude earthquake devastated Nepal and set off an avalanche that tore through base camp. Nick Talbot was injured and evacuated from base camp but, luckily, was not another number in the death count.

I was first introduced to Sony’s FS5 at a demo during the DOC NYC film festival. Meredith and I were attending panels at the festival with our thinking caps on determined to find ways to finance a return to Nepal. The Canon I shot on during our first trip had been broken in the avalanche and the Panasonic I owned would need an additional Interface Unit before I would consider it for our main camera. I needed a replacement camera that offered lots of benefits and wouldn’t break the bank. I immediately liked the FS5. It combined the features I needed, and then some.

I returned to Nepal for the second time in March 2016, but this time I was filming on my own which made it important that I had one camera that could do everything. I needed a camera that was easy to use while trekking in harsh environments and could accurately capture the beauty of the Himalayas. The ergonomic design of the FS5 made it easy for me to film during the 10-day trek up to Mount Everest base camp. I could watch my step and film at the same time without falling too far behind the expedition group. The hand grip on the FS5 allowed for a steady shot without the need for a shoulder rig. When I wasn’t filming, the FS5 and the Rode Shotgun Mic I attached to the mount on the handle fit easily inside my 55 liter day pack along with an extra jacket, sunscreen, snacks and a few other essentials. The small size of the FS5 was also a plus when I was filming backed up into the corner of a tent as Nick and his fellow climbers discussed their strategies on the mountain. I am glad I could strip the camera down even smaller by removing the handle and hand grip as needed. 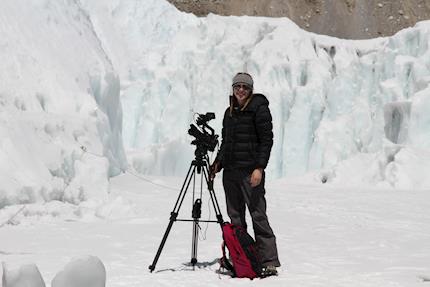 The terrain Nick and I were trekking through was breathtaking but also harsh. At high altitude a few extra pounds mean the difference between tired and exhausted so it was important that I could shoot for hours without the need to switch SD cards or change the battery pack. I brought six 64 GB Extreme Sandisk SDXC cards that could capture 76 minutes of 4K footage and one 128GB Sony SDXC card. This meant I could film for several days before turning on my laptop to save footage onto my 2TB Lacie Rugged Hard Drives because electricity is a luxury in Nepal. In base camp I used the expedition generator to charge the three Sony BPU battery packs I brought. I used a Goal Zero Solar Generator to charge the majority of my other equipment.

I brought two Sony E-mount lenses to Nepal to use with the FS5, an 18-105mm f/4 and a 10-18mm f/4. I used the 18-105mm lens nearly the whole time. It gave me the flexibility and ease I needed to capture the action of Nick’s story and the beauty of Nepal. The servo zoom and auto focus features of the camera also greatly helped me in that respect. I was apprehensive about using the auto focus feature from past experiences on other cameras, but it was smooth and allowed me to follow Nick’s action easily.

I usually relied on the peaking feature to double check focus and this worked in most situations. I found the greatest focus problems happened when working with bright and over exposed backgrounds, which were inevitable in the Himalayan sunshine and with a camera that costs well under $10K.

I pushed this camera to the limits operating it in harsh sunlight and freezing temperature. I had the camera out at 1am in 10 degrees Fahrenheit filming Nick’s departures from base camp for higher up Mount Everest. In the last two weeks of my two-month stay in Nepal the 18-105mm lens experienced some difficulty only in the coldest weather. The servo zoom would automatically zoom to the full 105mm and not allow me to pull it back, but once the camera and lens warmed up again it would work properly.  While I did encounter a nuisance with the 18-105mm kit lens, one of the great features of the FS5 is its lens compatibility.  There are a variety of lenses from Sony and from other manufacturers that work perfectly with the FS5, enabling different looks for diverse shooting needs.

One of the most useful features on the FS5 for me was the built-in ND filters. The Himalayan sun is brutal and the weather at 18,200 feet in base camp is temperamental. I would set up an interview in base camp with the ND at a full 1/128 and begin recording only to have the sun dip behind a cloud and prompt me to wheel the ND down to half of that. Luckily it was that simple. Since I was a one-woman crew it was difficult for me to connect with my interviewee while also worrying about sound, framing, and exposure, among other things. The variable ND filter in the FS5 took away some of this worry. 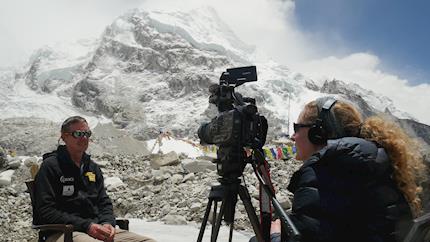 While the FS5 was easy to use in the run and gun situations I found myself in, it also had several features that furthered the film creatively. The slow motion settings on the FS5 allowed me to capture moments in slow motion that would have otherwise gone unnoticed. I had to plan exactly when I would want the slow motion shots, because I was shooting in 4K.

I often used the time-lapse shots when I had the free time. Playing with the frame rate and shutter speeds I was able to capture the grandness of the mountains. One of my favorite moments of the trip happened when I was alone filming one night. I set up a time-lapse of the Khumbu Icefall after the sky had cleared of the clouds that had left a fresh blanket of snow over base camp. There was a full moon out that lit up the way to Mount Everest. As I stood next to the recording FS5 I felt so incredibly lucky and thankful for the experiences that I have been opened up to because of this film.