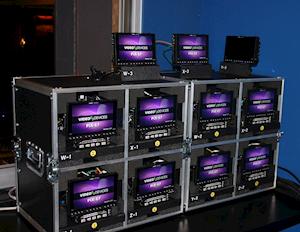 While Wright provided professional personnel and expertise for such productions, broadcast clients often rented gear or hired a production truck to meet their needs. “It was either you have a flypack that takes up space backstage, or you hire a truck that is outside,” says Wright, who was an engineer for a Chicago-based production truck earlier in his career. “Usually, if you wanted to do a multi-camera shoot, you were stuck going with a truck.”

After years of renting gear, Wright, and his partner Ken Heinemann, discovered a new brand of video recording equipment, and things began to change. “We were tired of renting gear from different rental companies. You just never knew what you were going to get. The quality was inconsistent and never really superb. Then we started using the PIX 260i and PIX 270i decks. From then on we fell in love with the quality of the products that Video Devices creates. So when the PIX-Es came out, it was perfect for the route we wanted to go, which was to position us at the forefront of the 4K era.”

The PIX-E Series of 4K recording monitors offers three models. The largest of which is the PIX-E7, featuring a seven-inch touchscreen LCD, monitoring scopes and tools, and the unique ability to simultaneously record ProRes and H.264. “That’s huge for us,” Wright says. “We do a lot of corporate events, and sometimes at the end of the day, the client wants the files ‘right now.’ It’s perfect to have H.264 on a $12 SD card that I can hand off to them, and we’re done.”

The fact that the lightweight, portable PIX-E monitors were designed for camera-mount applications didn’t stop Wright from thinking out of the box—or rather, into a smaller box. Speaking of a typical flypack, he adds, “The bulkiness and weight wasn’t ideal. When Video Devices created the PIX-E, it was an eye-opener for us. This was our way to provide professional rental and staging services to clients with a small footprint.”

“Traditionally, a truck was faster to set up than a flypack, but the flypack had the benefit of being the smaller footprint. Our system offers clients both—speed and economy of size. We’ve pre-wired our flypacks so we can do the setup just as fast as a truck, but our footprint is smaller than trucks and most traditional flypacks.”

The 4K the Wrightway flypack rental system includes an engineering rack, plus two STAR Cases, customized ATA-approved travel cases that are smaller than a two-foot square and weigh less than 40 pounds. Each case houses four PIX-E7s capable of recording 4K or HD. “We’ve done 15 shows already in 4K. It’s the new technology, so we’re maintaining our leadership position, and Video Devices has helped that happen,” Wright says. “The versatility of being able to record 4K or HD has been huge, because I’ve done plenty of HD shows as well. I’ve had anywhere from corporate to sporting events, documentaries to live entertainment; I’ve used the PIX-Es on all of those different genres.”

Recently, 4K the Wrightway added several Video Devices PIX-LRs to the flypacks. The PIX-LR is an audio interface accessory that mounts to the bottom of any PIX-E monitor. It provides Sound Devices-designed mic preamps, unclippable limiters, 48V phantom power, and most importantly for Wright, dual XLR I/O. “In my world, the flavor is always going to be XLR when it comes to audio. The quality of going through an eighth-inch line-level isn’t necessarily professional. It was a no-brainer to go with the PIX-LRs, and they also gave me left/right audio out, plus of course, the meters in the front and the independent gain structure controls.”

Wright adds, “Sometimes an audio guy can’t always be on all these different sets, so having the independent gain structure right there accessible to me is very helpful.”

Offering a neat, compact and portable setup that can deliver high quality audio and video in the desired resolutions is crucial for Wright in meeting their customers’ needs. The PIX-E7 has achieved that in ways beyond Wright’s expectations. “The display is superb. I mean, most recorders don’t give you the full HD resolution on their displays. I appreciate the fact that Video Devices thought about putting scopes, false color, the TapZoom™ feature; all of these things are huge for what I need to do to create a professional service for a client.”

Wright also admits configuring multiple PIX-Es within the flypacks is often a cost-saving bonus for multi-camera workflows. “I have clients now who may be tight on a budget, and they don’t want to pay for extra gear to create a multi-view for them. The way my racks are arranged, it’s basically set up as if it’s a multi-view. So I have clients that maybe are just ISO recording; we’re not doing a line-cut, and they’ll just sit in front of the recorders and see all 8, 10, 12 cameras – whatever we may have – via the PIX-Es, and I’m saving them money by being able to do that, because the quality of the monitors and their displays are so good.”

Wright adds, “We’ve done a lot of high-end shows, for many years with a truck. From here on out, we’re staying with the 4K the Wrightway flypack we’ve created, outfitted with Video Devices gear. We believe our cost-effective, efficient production solution is the wave of the future.”