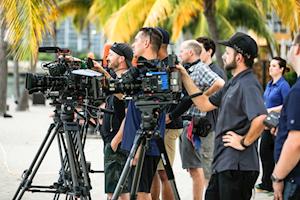 Utah-based production company Lenzworks recently shot the second season of Relative Race, a co-production with broadcast partner BYUtv, with a dozen VariCam LT 4K cinema camcorders. An ingenious pairing of a race against time with a genealogy hunt, Relative Race pits four couples against each other in a race from Miami, FL to Boston, MA, with required stops along the way to complete challenges, then meet and stay with relatives they previously didn’t know existed. The prize for the winning couple: $50,000.

The series of 10 hour-long episodes will premiere March 2017 on BYUtv (www.byutv.org).

Tom Zdunich, Lenzworks’ President/Creative Director and co-Executive Producer of Relative Race, said the VariCam LT was chosen on the basis of its ergonomics, light weight and, especially, low light performance.

“The show is clearly very run and gun, and we wanted better low-light capabilities than we realized with the 4K camcorder we used on season one,” he said. “With an increased budget for season two, we camera shopped at NAB 2016, and were sold on the VariCam LT’s size, ability to shoot ProRes and, most persuasively, its native 5000 ISO for extreme low-light situations.”

The 10-day race was covered in real-time on a 10-day shoot in September. With their DNA processed and family lineage mapped in advance of the start, each of the couples was tasked with driving to nine cities where they completed a local challenge, then met and spent the night with a “new” relative—all without the aid of any technological support, including smart phones and computers. At the end of each day, strikes could be assigned to couples who missed daily deadlines—and three strikes and a couple was out of the race.

Lenzworks fielded four crews, one assigned to each couple. Each crew was comprised of an A and B team, with the A team of two photographers, a grip/DIT and producer traveling with the couple, and the B team, with one photographer and one producer, traveling a day ahead to shoot B roll, drone footage and  interviews with the “surprise” relatives, in and out of their homes.

Zdunich (who was the field producer in charge of all technical aspects of the production) said that overall the 12 VariCam LTs were used 70% handheld, 30% on tripods. They shot a mix of formats, with primary interviews and computer screens shot in AVC-Intra 4K 4:2:2, with the balance and lion’s share of footage shot in ProRes 422 HQ 1080p. The camcorders were outfitted primarily with Fujinon 19-90mm Cabrio PL compact zoom lenses, with the B teams also shooting with some PL-mount prime lenses.

“All our DPs concurred that the VariCam LT’s low-light capabilities were invaluable,” Zdunich noted. “Our videographers were lighting less, and shooting a lot more, with the freedom to capture moments that last season would have been lost because we were stopping down to light.”

Zdunich said that more than half of total footage was shot at ISO5000, including virtually all interiors at the relatives’ homes as well as some outdoor acquisition. The production shot an ungraded master in V-Log, with a custom LUT applied and visible in the viewfinder, and took advantage of the VariCam LT’s ability to record high-resolution proxy files, which are being used for reference and scripting in post.

“We achieved a nice, natural image, which was our goal,” said Zdunich. “In terms of image production, the VariCam LT isn’t overly saturated and handles shadows very well.”

Relative Race is currently in post at Lenzworks, with editing being done on Adobe Creative Cloud. The series will air and stream in HD, streaming at www.relativerace.com.

About the VariCam LT
The VariCam LT camcorder inherits the same super 35mm sensor and superb imaging capabilities that distinguish the award-winning VariCam 35, but with significant reductions in size, weight and price. Incorporating this identical imaging “DNA” in a more compact rendition, the VariCam LT delivers 14+ stops of dynamic range with V-Log, and the esteemed cinematic VariCam image quality and color science, as well as the VariCam 35's breakout innovation, dual native ISOs of 800/5000. Weighing just under six pounds and having superior capability to similar sized cameras, the VariCam LT is the ideal camera for handheld, SteadiCam, jib, crane, drone, gimbal and overall cinema verité work. The VariCam LT offers a host of new features including an EF lens mount, hot swappable batteries, IR shooting capability, a 23.98 PsF output, cinema style file naming, and image presets such as scene files.

For more information about Panasonic VariCam cinema and high-speed cameras, visit http://us.panasonic.com/varicam, or contact Panasonic at 877-803-8492.