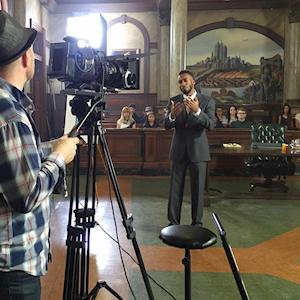 YouTube star, Prince Ea, has teamed up with production company, Shareability, to look at a few different areas of the future, including education, with Neste's Pre-order the Future campaign. Neste is a Finnish renewable energy company, and together with Prince Ea, they are exploring how to use new types of renewable raw materials to develop long term sustainability.

Shareability came on board  to work with Prince Ea to create the YouTube video “THE PEOPLE VS. THE SCHOOL SYSTEM,” by relying on Blackmagic Design’s URSA Mini 4.6K cameras and DaVinci Resolve Studio.

We talked to Joel Bergvall, Partner at Shareability, about the production process of the video, using Blackmagic and what it takes to create a viral video.

ProductionHUB: What was the pre-production process for this video? What were some of the inspirations behind the video?

Joel Bergvall: Prep was very fast. We started our first creative outline on Labor Day, which was Monday the week of the shoot. We scouted the location Thursday the week before. It all basically fell together in a matter of days. Our guiding light was the amazing poem by Prince Ea and the core concept of the video, without that we would have been lost at sea.

PH: What's a key secret to creating a video that people will want to share?

Joel Bergvall: Ha! We could tell you, but I’d have to kill you… No, seriously — at Shareability we have built an entire business around creating videos that explode across the web. We find that there isn’t one trick to it, but an endless number of small but vital details.

PH: Any special techniques to creating a "viral" video?

Joel Bergvall: The first three seconds… The ability to grab attention on mute… Connecting with the zeitgeist… Trending topics… Suitable (not always high) production quality… In isolation, these things all seem simple, almost basic, but they all need to align like a giant jigsaw puzzle, sometimes battling and contradicting each other.

PH: How does a video go viral?

Joel Bergvall: The billion dollar question. The self aggrandizing answer is: “Hire us and we’ll do it for you!” In all seriousness, we find it helpful is to imagine your teenage bedroom wall. The stuff you put there was not only a representation of yourself, but of how you wanted the world to see you. The equivalent to that in our digital age is your Facebook wall. You will post and share things that help define you in the eyes of others. This video accomplished that in spades, reaching well over a completely insane 200 million views.

PH: How did you choose the Blackmagic URSA Mini 4.6K camera for the project? DaVinci Resolve Studio?

Joel Bergvall: The URSA Mini 4.6K was an obvious choice. To my eye, it’s the closest thing to an Alexa like image without an Arri price tag. The ability to shoot at higher frame rates, the highlight retention, the skin tones… My list goes on. The piece was cut in Final Cut X (yes, really, you should try it, once you break through the wall it’s actually amazing).

PH: What are some of the best features? Things you would change?

Joel Bergvall: If there is one key highlight of the camera it’s the sensor. Personally, I tend to treat digital cameras like film stock. Pick a stock, expose and shoot. With the URSA Mini 4.6K the sensor has come a long way. The weight and size of the body is also great, and the ease of use of the new 4.0 software is unbeatable. Using a camera on set there is no time to fidget around with deep menus and figure out the minutia of various configurations. That’s what I love about the Alexa and the new software on the URSA Mini is equally simplistic. Everything you need is on the touch screen and people can pick up the camera and figure out how to use it in minutes.

It inspires confidence. Unlike some cameras anyone can easily understand every setting and you can trust that what you see is what you get. There isn’t some weird hidden gamma setting that’s going to cause you problems in post. It’s as reliable as shooting film, with all the digital advantages.

We would urge everyone to not only see the video but to take an interest in education. Even if you don’t have kids in school at the moment, education is the key to our future and we cannot invest enough in propelling it forward.

I’d also like to say a big thank you to Neste, the company behind this video. They have stepped up to support education in a big way, and they did so allowing Prince Ea to take the spotlight, which is both unusual and smart. This is what building brand love is all about.