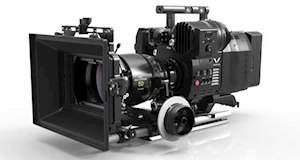 Panasonic announced a new "cinema-ready" version of its VariCam 35 aimed at high-end Hollywood studio customers. Jointly developed with Codex, the Panasonic VariCam Pure is a modular camera system with integrated 4K uncompressed recording at up to 120fps thanks to a new V-Raw 2.0 recorder design.

"There is significant demand for uncompressed raw recording in the high-end market," said Panasonic Senior Product Manager Steven Cooperman in a prepared statement. "The modular concept of the VariCam has enabled us to meet this demand."
Panasonic said the recording unit attaches to the back of the camera head, which is built around the original VariCam 35's Super 35 sensor. The new camera weighs 11 pounds including the recording unit.

"By tightly integrating this new V-Raw recorder with the VariCam for a smaller, lighter, [and] frankly better system, we can now more effectively meet the needs of our clients on high-end 4K raw productions," said Sim Digital Engineering Supervisor Michael Bravin in a statement provided by Codex.

The new camera will record to Codex Capture Drives, meaning it should fit seamlessly into existing workflows that rely on the Codex Production Suite, Codex said.

The VariCam Pure will be on display at Panasonic's exhibit at IBC 2016 (Hall 11, Stand C45). Panasonic says the Codex V-Raw 2.0 recorder will list for $30,000; we're waiting for verification on the price of the VariCam 35 camera head.